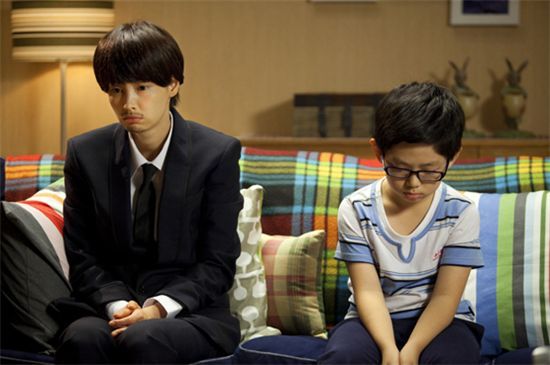 Ji-hyun (played by Lee Na-young) lives a busy life as a movie stills photographer who is also in preparations to put on her own private exhibition. She is also steadily growing closer to her boyfriend Joon-suh (played by Kim Ji-suk). Their relationship started slow but when Ji-hyun finally builds enough trust and love for him, a nine-year-old boy rings on her doorbell asking for his dad. It had already been nine years since Ji-hyun freed herself from the then seemingly useless and meaningless life living as a male. The short-lived peace she had earned after so much effort becomes shattered in just seconds with the appearance of her son. The dad who can no longer be a dad and the son who now wants to call out for his dad, start living an odd and risky life together.

A child who pops up one day and calls the main character his dad, a man-to-woman, woman-to-man disguise show and a love story surrounding such incidents. "Lady Daddy" deliberately reveals that it has incorporated elements which are key to a film's success -- the longtime well-received story about a beautiful lady and a child and the more recently accepted use of controversial topics, as was proven with last year's hit film "Speedy Scandal". If you think this film is out of style, it is because it does not attempt to hide that quality about it and if you feel a certain affection to this film, that too is because it does not conceal it. But such intentionality is not regarded as being cunning because Lee's composed acting makes her sincerely spoken lines shine even further and the producer does not try to be clever with his work but rather remains simple, just like Joon-suh's uncalculated and naively honest love for Ji-hyun. Furthermore, knowing that the issue of changing one's gender is not 'a piece of cake', the film knows how to create humor out of the topic but not make fun of it.

What Ji-hyun discovers during the short time she spent with her child is probably not a grand and overwhelming form of 'paternal love' nor 'maternal love'. Rather, it may be an acknowledgment that the past she had wanted to erase or bury, is as alive as the heart of her nine-year-old son. Not denying the past that existed regardless of her choice and opening up to that past after washing off her concealing make-up. Like such, when Ji-hyun can live not as her son's 'mom' but 'dad', that is when she starts walking the path toward making her own choice. Harimao Pictures of "My Girlfriend is an Agent" produced the film with writer Cheon Seong-il of KBS TV series "The Slave Hunters" writing the scenario. The film is est for a release on January 14.

"[PREVIEW] Movie "Lady Daddy""
by HanCinema is licensed under a Creative Commons Attribution-Share Alike 3.0 Unported License.
Based on a work from this source