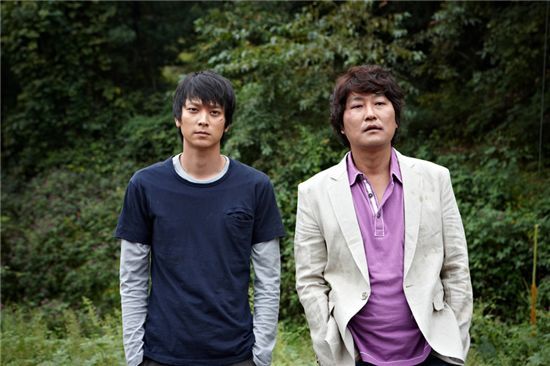 On a peaceful afternoon, several rounds of gunshots are fired in an apartment complex. As the terrified residents run out of the apartment building, two men face their twisted fate during the chaos. That day, NIS (National Intelligence Service) agent Hangyu (played by Song Kang-ho) gets kicked out of his organization for failing to accomplish his mission while North Korean spy Ji-won (played by Gang Dong-won) also gets abandoned by his home country for being a traitor. Six year pass and the two men meet again, each convinced that the other does not recognize him. The two are closer to being enemies than sworn brothers as they both dream of turning around their life again at the expense of the other. But as they start living together and look into the other person's loneliness, the mood between the two men start to change, little by little. What is worth watching in "Secret Reunion" is how the relationship between these two men change over time.

Like the title "Secret Reunion" -- which reveals the film's ending in itself -- the film does not twist its plot or beat around the bush. The drama speedily proceeds to the climax where Han-gyu and Ji-won become brothers and the frequent points of humor along the way, provided by main and supporting actors, are effective. The film does not try to make viewers laugh with empty conversations or meaningless body movements. The dialogues and set-ups which reveal certain aspects -- and even their pain -- of the characters make the movie more entertaining and likeable. The confrontation scene at the apartment where Han-gyu and Ji-won first meet, the pursuit scenes or the action scenes at the construction site, were all shot clean and light. Replacing the fancy camera work and stylish camera angles, the sweaty beatings and the struggles of an NIS agent, who is about as capable as an average government worker, provide a different kind of fun than beautiful, well-made actions do.

The combination of Song Kang-ho and Gang Dong-won, who have never acted together, is also entertaining. Song Kang-ho seems relaxed enough but indubitably explodes when his emotions build up and Gang Dong-won also shows a more deep progression of emotions than he displayed in the film "JEON WOO CHI : The Taoist Wizard". But viewers will clearly be divided about the film's ending, which could be called both the strength and the weakness of "Secret Reunion". The ending, which remains faithful to the rule of a commercial film, is understandable but it is also too light that it takes out the weightiness of the story between Han-gyu and Ji-won. The movie opens in theaters on February 4.

"[PREVIEW] Movie Secret Reunion"
by HanCinema is licensed under a Creative Commons Attribution-Share Alike 3.0 Unported License.
Based on a work from this source