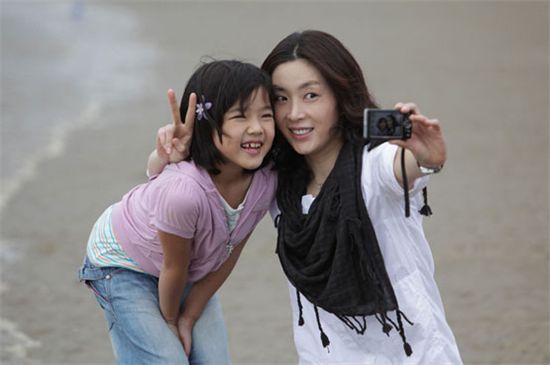 Simply told, film "Wedding Dress" is about a mother who will soon die and her young daughter. But the movie itself is not as simple or cold-hearted as it was just said -- the process of how Go-eun, played by actress Song Yoon-ah and Sorah, by child actor Kim Hyang-gi, are shown spending their remaining time together is sad enough to dry up the viewer's tear ducts. Wedding dress designer Go-eun, who had worked so hard her whole life that she had never packed her daughter's lunchbox before, is diagnosed with stomach cancer one day. When she dies, Sorah will be left alone because her dad passed away much earlier. So Go-woon packs a lunchbox all night long and takes Sorah to the beach to give her daughter memories to cherish after she dies. She also starts making a wedding dress that Sorah will wear one day. But Go-woon's body becomes too fragile and collapses before she completes the wedding dress.

Watching a sad movie is sometimes similar to the experience of watching a horror film. There is the enjoyment which comes from watching a well-made horror film with an unexpected plot, as well as a raw sort of pleasure which comes from seeing victims die while screaming and splattering blood. Similarly, after one spills out their tears to their hearts content, a catharsis can be experienced even with predictable stories. Director Kwon Hyeong-jin, who had already proven his talent in creating sad movies about a child and adult through film "For Horowitz" ("My Piano"), effectively brought out the tears again in "Wedding Dress" with Kim and Song. It is impossible not to cry in front of the mother who wants to live for her daughter but has nothing left to do for her except make her wedding dress and the nine-year-old Sorah who swallows her tears for her mother because she knows she will be more pained than herself.

Of course, the numerous set-ups intended at drawing tears from the audience have been long existent cliches and the outstanding acting by Kim, whom director Kwon said he felt "honored to be working with", is not enough to cover up the film's flaws. But once in a while, it is not bad discovering a sad and good-natured story which is unlikely to exist in reality. Devising a fantasy to make it seem like a reality is one of the good deeds films provide us with. "Wedding Dress" opens in theaters on January 14.