What to expect from, or worry about, Lee Seung-gi, Shin Min-ah and the Hong sisters

2. Lee Seung-gi: The man of 100 percent viewership rating VS another role as immature rich boy

Although it has been over a year since he starred in SBS TV series "Shining Inheritance", which recorded a viewership rating of over 40 percent, Lee Seung-gi is still considered a guarantee for high ratings as his regular variety show appearances -- in KBS' "One Night Two Days" and SBS' "Steel Heart" -- continue to score solid figures. However, it is up against some pretty stiff competition; KBS TV series "Bread, Love and Dreams" keeps renewing its viewership ratings, which might score as high as "Shining Inheritance"; its follow-up "The Fugitive Plan B" also has high expectations with its producers who made "The Slave Hunters" and fancy cast that includes Rain and Lee Na-young; and MBC's "Naughty Kiss" will go on air in early September with fellow young star Kim Hyun-joong in the lead role.

But what is important for Lee Seung-gi is not whether the series succeeds but whether he can show viewers his new potential as an actor through "My Girlfriend is a Gumiho". After playing an immature Mama's boy (in KBS TV series "Famous Princesses") and spoiled rich boy ("Shining Inheritance"), Lee has been cast for the role of a rich boy named Cha Dae-woong who dreams of becoming an action star. He explained that he felt no pressure about the transformation, saying his previous roles "could seem similar if you just describe them as 'immature' but so many different things can come out of them. If [Lee's character] Sun Woo Hwan in 'Shining Inheritance' was an incredibly serious person, then my character in 'My Girlfriend Is Gumiho' has a lot of comic, adorable sides to him so they will be completely different characters". Lee has said that he has been studying the character with the writers since receiving the synopsis around the end of last year, and "reflected my own traits because I also like funny stuff and maximized the facial expressions and talking speed in a comical way". He added that it helped that he had learned for three months how to do wire actions and martial arts for a production he had been preparing for in the past. Could Lee Seung-gi's efforts broaden his scope of acting by a notch in "My Girlfriend is a Gumiho", which has "all the elements of comedy, melodrama and action but no eroticism?"

Shin Min-ah is a star. She has starred in numerous television dramas, films and mega-scale television commercials. The August 3 episode of SBS' "Steel Heart" also revolved around Shin Min-ah. However, at the press conference for "My Girlfriend is a Gumiho", one reporter remarked that "some people are criticizing that you haven't been faithful to your original job because you haven't done films or dramas for quite a while and just appeared in television commercials". To which Sin answered, "I did two films last year. I have always been making movies but it just seems that way because the commercials outnumber the movies", indicating that Shin Min-ah's presence as an actress is not as strong as her star power. It also goes to show that despite starring in over ten films and six dramas including the notable KBS TV series "Devil" and film "A Bittersweet Life", there is no one film or drama that one can immediately associate with the name 'Shin Min-ah'.

That is why it seems like it is the perfect opportunity for Shin Min-ah to have met a story written by the Hong Sisters, whose specialty lies in emphasizing a unique, adorable female character in their drama. Her character "My Girlfriend is a Gumiho" obstinately whines to Cha Dae-wong, "Buy me some meat! I really really want to eat meat. Buy me a cow, please?" and turns angry when he doesn't comply with her complaints. Shin Min-ah explained, "Unlike the 'gumiho' [a fox with nine tails] in the legend, she has an innocence like a newborn baby. She has big movements, which are so big that I worry they might be too over-the-top. And she expresses her emotions honestly, so I think a lot about the actions of my six-year-old niece when I act. In the second half of the show, she is even placed in a sad situation and I want to play her so that Gumiho, who wants to become a human being, will seem adorable". Could Shin Min-ah be more than the 'pretty woman' inside a commercial and become a female lead who is loved? 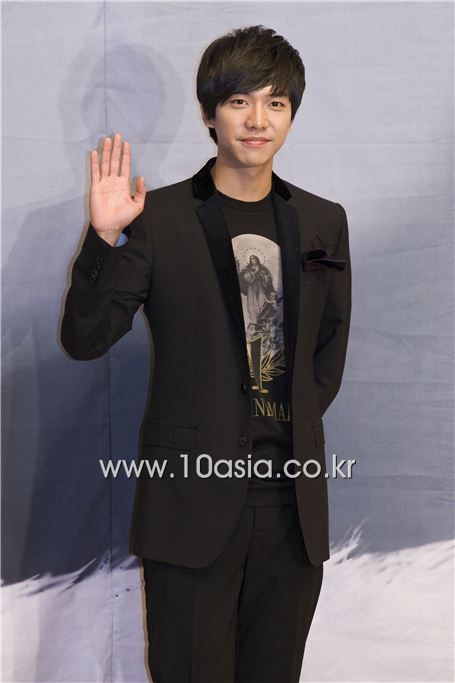 Actor Lee Seung-gi poses during a photo session of a press conference for upcoming SBS TV series "My Girlfriend Is Gumiho" held at SBS' headquarters in Seoul's Mok-dong district of Seoul, South Korea on August 4, 2010.

"[PREVIEW] SBS TV series "My Girlfriend Is Gumiho" (2) "
by HanCinema is licensed under a Creative Commons Attribution-Share Alike 3.0 Unported License.
Based on a work from this source