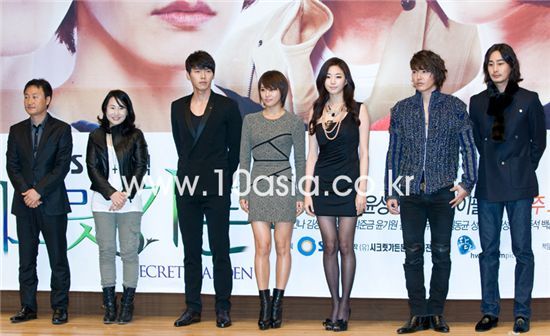 Scenarist Kim Eun-sook is back, the writer of romantic series about couples in love ("Lovers in Paris", "Lovers in Prague" and "Lovers") and dramas about professionals ("On Air", "THE CITY HALL"). Here, the word 'back' contains two meanings. That she is back with an SBS drama titled "Secret Garden" and that she has gone back to telling a story about lovers. This may have some asking whether she is going back to her old ways but that is not true. The story of a blunt rich man falling in love with an ordinary woman who has a strong ability to maintain her livelihood may seem similar to "Loves in Paris" at a glance. But by adding the setup that the main male and female characters' souls are switched, "Secret Garden" strays away from ending up as another Cinderella story and instead heads toward becoming a comic fantasy drama. In other words, "Secret Garden" is like new seeds sown on familiar grounds.

The strongest weapon "Secret Garden" holds is in how its characters' souls are switched, to the extent that both main cast Hyun Bin and Ha Ji-won said, "Our souls switching is the toughest yet also the most attractive element [to the story]". The blunt and arrogant department store owner Kim Ju-won (Hyun Bin) turns into a pathetic man and stuntwoman Gil La-im (Ha Ji-won) who was always saying she is sorry, shakes her finger at Hallyu star Oscar (Yoon Sang-hyun) without an ounce of hesitation, the man she had idolized for so long. And the absurd yet detailed setups such as how Ju-won will scream like a girl and crouch down, or say, "I just really wanted to tell you this is a really expensive brand" while turning his body around and pulling out the tag of his sweatsuit, as well as La-im increasingly acting like a man, is visual proof of writer Kim Eun-sook's words that she "will in a much more fun way show imaginary scenes that cannot stray too far from people's imagination". To top this off, the lines the actors say in the drama are tossed back and forth at a speed that adds to the cheerfulness of the drama.

The viewer will be able to tell that writer Kim's most recent drama, SBS' "THE CITY HALL" which talked about politics with city hall set as the background, is noticeably different in terms of both genre and characteristic to "Secret Garden" which she said, "I intentionally wrote to be fun". And it comes after how after writing six dramas till now, she "contemplated on whether to write a drama that helps the world or one that will see good ratings". She decided, "I let go of the depth I showed in 'THE CITY HALL' and my greed as well and made a drama which is easy for the entire family to watch on the weekends". We do not know as of yet whether she is retrogressing or progressing. It will depend on how well the character' lines are fused into the plot of 'switched souls'. Her being unforthcoming even about how Ju-won and La-im meet over concern that she may be providing spoilers to the first two episodes of the drama is enough to show that "Secret Garden" will contain elements of fantasy from the beginning. Will writer Kim be able to achieve her hope of reclaiming her glory from her "Lover of Paris" days? The show premieres at 9:50 p.m. on November 13.

"[PREVIEW] SBS TV series "Secret Garden""
by HanCinema is licensed under a Creative Commons Attribution-Share Alike 3.0 Unported License.
Based on a work from this source