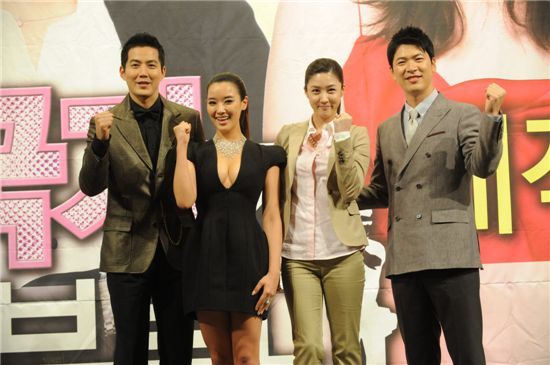 
"Secret Agent Miss Oh", a miniseries whose script won the second-highest honor in a competition hosted by major public network KBS in 2009, may sound like a serious and solemn drama at first glance. But to quote actor Kim Sang-kyung's words, it is a romantic comedy which is "so funny that it was necessary to act while putting pressure to my toes". Oh Hana (played by Lee Soo-kyung), a police officer who is always causing trouble, exhibits a sense of duty on the occasion of getting dumped by her boyfriend, arresting a shameless man who tries to install a hidden camera in a women's bathroom. But that man turns out to be intelligence official Ko Jin-hyuk (Kim Sang-kyung) who was executing a secret operation and Oh Hana becomes falsely charged with having interrupted the agency's investigation. Hence their first encounterance turns their relationship from coincidence to ill fate and when Ko Jin-hyuk's past lover Choi Eun-suh (Horan) and undeserving tycoon Han Do-hoon (Ryu Jin) also join in the picture, "Secret Agent Miss Oh" starts unraveling its unpredictable story.

"Secret Agent Miss Oh" is expected to take off to a smooth start being the only romantic comedy in its time slot amongst SBS TV series "Giant" which also premieres the same day and MBC's "Dong Yi" now into its fourteenth episode. The largest changes will be seen in Ryu Jin who said, "[Han Do-hoon] Is similar to my actual self so I'll be acting naturally, without having to prepare anything in particular", and Lee Soo-kyung who has changed 180 degrees from her character in SBS drama "Love You a Thousand Times". But what will also be worth noting will be singer Horan who will be making her acting debut through "Secret Agent Miss Oh". And like Kim Sang-kyung said at the press conference on Monday -- "It is a show full of an array of talented supporting actors positioned at the right places at the right times" -- talents including Shin Shin-ae, Kang Shin-il and Yang Geum-seok will serve as a base providing solid support for the main cast. Hence the key will lie in how much of a not-so-obvious story is told. This is also the reason why "Secret Agent Miss Oh" being the only cheerful romantic comedy in the Monday and Tuesday primetime slot could be both an advantage and disadvantage for the show.

"[PREVIEW] "Secret Agent Miss Oh""
by HanCinema is licensed under a Creative Commons Attribution-Share Alike 3.0 Unported License.
Based on a work from this source