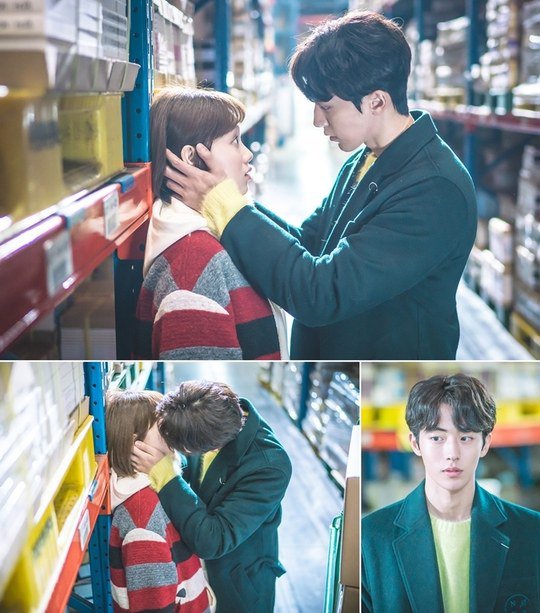 Lee Sung-kyung and Nam Joo-hyuk who are starring in "Weightlifting Fairy Kim Bok-joo" take on the roles of weightlifter Kim Bok-joo and swimming athlete Jeong Joon-hyeong.

The two are friends who develop feelings for each other. In the pictures revealed, Jeong Joon-hyeong is holding Kim Bok-joo's face in his hands and is gradually kissing her. Have they finally crossed the friendship zone?

This scene was filmed on the 17th at a warehouse. Despite the dust and cold, the two heated up the set with their passionate performances. Before the kiss scene, Nam Joo-hyuk and Lee Sung-kyung went over their lines and directions to make sure there were no mistakes. They made the kiss seem natural as it could have been awkward for the both of them.

When the camera started rolling, the playful couple turned serious and perfected the scene. Those around them claim it was like ice had blanketed them all.

On this week's episode of "Weightlifting Fairy Kim Bok-joo", Lee Sung-kyung and Nam Joo-hyuk are going to open up to each other.

"[Preview] "Weightlifting Fairy Kim Bok-joo" Lee Sung-kyung and Nam Joo-hyuk kiss in a shady warehouse "
by HanCinema is licensed under a Creative Commons Attribution-Share Alike 3.0 Unported License.
Based on a work from this source