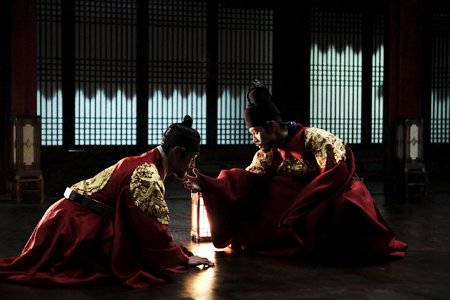 This film image released by CJ E&M shows actor Lee Byung-hun as king Gwanghaegun, right, and his commoner double Ha-sun in "Masquerade". The movie by Choo Chang-min is slated for a late September release. / Courtesy of CJ E&M

With the presidential election only a few months away, "Masquerade" could not be released at a better time.

Inspired by Mark Twain's "The Prince and the Pauper", the historical drama about switched royal identities challenges the audience to think about the system of the government today, specifically the way we see the role of the nation's top job, according to Lee Byung-hun, the lead actor who plays the two protagonists.

"There are plenty of movies which offer vicarious satisfaction but Gwanghae portrays a real king in history and how he (the commoner replacement) learns to govern a country from zero", said Lee at Monday's promotional event for the media. "It asks the question: what would you do if you were king?"

The new movie by Choo Chang-min ("Mapado", 2004) revolves around Gwanghaegun, the 15th ruler of Joseon Kingdom (1392-1910) and little-known figure commonly mistaken as a tyrant today. The suffix "gun" denoting a prince rather than a king, he was one of two sovereigns unable to secure posthumous temple names (ending with jo or jong), after being overthrown by a coup. His notoriety comes from the association to the other "prince" Yeonsangun, the 10th king, considered the worst oppressor of the people during a five-century-long history.

After having acceded to the throne in a time of political turmoil, with the court embroiled in fights for influence between different alliances, Gwanghaegun fears assassination. From here the film takes the creative turn as the king switching places with a commoner Ha-sun temporarily with the help from a confidante, Heo-gyun (Ryu Seung-ryong).

Things get complicated when others start noticing the sudden change in the ruler's personality, including the queen (Han Hyo-joo), who prefers the new, more affectionate husband, and his loyal guard (Kim In-kwon). Further problems arise when the stand-in goes rogue, expressing his true thoughts about the social problems and court corruption.

At the media event, Ryoo talked up the film and mentioned his personal recollections.

"It was the first time I felt so much tension on the set, with Lee Byung-hun and with the director", he said. "Even the guys in the crew were tiptoeing around us because of this".

To him, this stiff atmosphere only added to the performance: "The one-on-one scenes between Gwanghaegun and my character were filmed at the beginning. That emotional distance, some of it definitely intentional, helped us maintain that tension between our on-screen characters".

Choo spoke of another realistic aspect in his film: the set design.

"I visited a lot of palaces before the shoot", said Choo. "What struck me about all the other period dramas and movies made up until now was that they were quite modest in scale. So I decided to build the palace set from scratch - worthy of a true royal palace".

Lee, claiming to have natural instinct for comedy that is "dying to be let out", said the commoner role gripped him right away.

"It was when I was in New Orleans, on the set of G.I. Joe 2", said Lee. "I wanted to give myself a month or two to think (the role) over, but it was that uncultured and impish character that really pulled me towards it from the beginning".

"Masquerade" (translated title: "Gwanghae: the Man Who Became King") is slated for a late September release in nationwide theaters. It is not yet rated as it is still in the editing process. Distributed by CJ E&M.

"Prince-pauper tale gets election-year twist in 'Masquerade'"
by HanCinema is licensed under a Creative Commons Attribution-Share Alike 3.0 Unported License.
Based on a work from this source