"Producers" explained by the cast 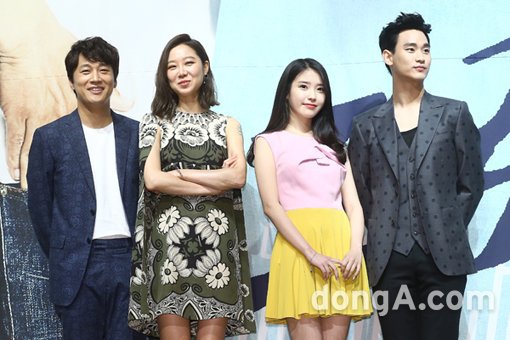 Cha Tae-hyun, Gong Hyo-jin, Kim Soo-hyun and IU are the lead cast of the KBS 2TV drama "Producers" which had its premiere on the 11th in Yeoksam, Seoul.

The drama that's being released on the 15th, is about the daily lives of producers in the entertainment department in KBS. It shows what goes on behind the scenes of popular shows and fancy stars.

The drama might have been pressuring for the cast but they claim they weren't so worried thanks to 'multi-casting'. Kim Soo-hyun said, "I didn't have to worry about it on my own. We could rely on each other and that positive energy is reflected in the drama". Gong Hyo-jin claimed, "The harmony of the cast is the best so far".

The drama is written by Park Ji-eun from "My Love from the Star" and produced by Seo Soo-min-I from "Gag Concert" and Pyo Min-soo from "Full House". Gong Hyo-jin who has a movie scheduled in June said, "This drama had one of the best scenarios I have ever read so I decided to jump on board". Kim Soo-hyun complimented the scenario as, "The perfect guideline".

This is the first entertainment drama. It contains interviews by the cast in the middle of episodes and real live recording scenes of real shows have also been input.

Cha Tae-hyun says, "Producers Kim Tae-ho from "Infinite Challenge", Na Yeong-seok from "Three Meals A Day" and other famous show makers will appear in the drama so will "Music Bank", "Vitamin" and other shows". IU stars as Cindy, a famous singer of 10 years unlike the rest who are producers in the drama. "I referred to Hyeon-ah from 4Minute and Krystal from f(x) for my role".

""Producers" explained by the cast"
by HanCinema is licensed under a Creative Commons Attribution-Share Alike 3.0 Unported License.
Based on a work from this source