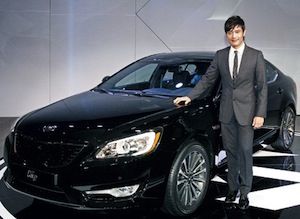 The "supporting actors" with the most exposure in the TV spy drama "IRIS" are cars made by Kia Motors. Featured in the action-packed program is the entire stable of Kias, including the K7 luxury sedan, Mohave SUV, Forte compact and Sorento R SUV. The Korean automaker provided 19 vehicles in all.

When "IRIS" went on location to Hungary, Kia supplied seven cars through its local office. It even unveiled its newest luxury sedan -- the K7 -- in the drama, with Lee Byung-hun, who plays the lead, driving a specially-prepared prototype. The sedan is scheduled to be officially launched this month.

Powered by the huge popularity of "IRIS", Kia is featuring models dressed like secret agents in promotional events for the K7. It costs Kia around W200 million (US$1=W1,165) to supply the cars taking fuel costs and price depreciation of the vehicles into account, but the carmaker says the publicity is worth it. It is considering putting up the prototype K7 for auction. The car cannot be sold otherwise since it is not fully completed, but the company believes fans of Korean movies and TV dramas in Japan and other Asian countries could be very interested.

Until a while ago some foreign carmakers have usually used product placement as a way to promote their vehicles in Korea. But now the trend seems firmly established as the cost of conventional advertising rises. In some cases, companies even pay film producers some W100-200 million besides providing cars. Increasing interest in product placement has also led to their increasing involvement in the film or drama production.

"A car's image is at stake when it comes to sponsoring TV dramas or movies, so we take a look at the scripts and go over the content first", said one source in the industry.

Currently, TV broadcasters are barred from showing corporate logos on programs, but a revised regulation allowing it has recently been passed by the Korea Communications Commission. If it is approved at a Cabinet meeting, the logos of carmakers can appear on TV shows.

Cars used in movies or TV dramas are usually sold at 10 to 15 percent discounts. The Kia vehicles used in "IRIS" will be around W2 million cheaper than brand new ones.
_______________
Actor Lee Byung-hun poses in front of Kia's K7 luxury sedan at an event to showcase the new vehicle at a hotel in Seoul on Oct. 24. /Courtesy of Kia Motors