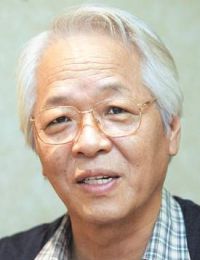 Lee Cheong-joon, who is often called an "intellectual writer" for his refined writing style and thought-provoking literary themes, died of lung cancer yesterday. He was 69.

Born Aug. 9, 1939 in Jangheung, South Jeolla Province, Lee graduated with a degree in German Literature from Seoul National University and made a debut in 1965 with his short story "Leaving the Hospital" (Toewon), which received the New Writer's Prize in the literary contest sponsored by the journal "Sasanggye".

Lee is widely regarded as one of the most influential Korean writers, with many of his novels adapted into movies and television dramas. Lee has published nearly forty novels and collections of short stories, exploring various subject matter. His work has been translated into English and other major languages.

Lee's novels tackled a wide range of themes including Korea's traditional beliefs as well as the alienation people feel living in the modern world. Among his early works is "An Imbecile and an Idiot" (Byeongsin gwa mejeori, 1966), which probes the spiritual malaise of the post-war Korean youth. "This Paradise of Yours" (Dangsindeurui cheonguk, 1976) explores the dialectics of charity and the will to power, with the leper colony of Sorok Island as the backdrop. The novel was adapted into a television series that brought Moon Sung-keun into stardom.

One of his most famous novels is "Seopyeonje" (1993), which revolves around pansori, a traditional Korean oral performance which features a singer of tales accompanied by a single drummer. In the novel, the traditional artistic expression turns into a mode of reconciliation to life, ultimately hinting at the possibility of transcendence in the face of countless woes.

Korea's top director Im Kwon-taek made the novel into a blockbuster film of the same time, drawing in a record number of audiences and helping spark public interest in the traditional art of pansori.

In 1996, Lee introduced "Festival" (Chukje), a story about a funnel that plays the role of a new beginning of life. From the planning stage, Lee was considering a movie adaptation, so the novel was released together with the screening of the film, which starred Ahn Sung-ki and Oh Jung-hye.

Last year, Im Kwon-taek gave another tribute to Lee's literary achievement. For his 100th film, Im made "Thousand Year Crane" (Cheonneonhak) based on Lee's The "Wanderer of Seonhak-dong" (Seonhakdong nageunae), again a story that is centered upon the art of pansori and the search for true meaning in life.