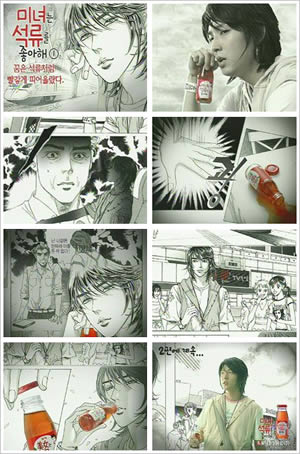 "The King and the Clown" sold 12.3 million tickets, Korea's no. 1 movie of all time until then, and the hero Gong-Gil, a man with a smile more beautiful than that of any woman, kicked off a syndrome all his own in the first half of this year. The success story of the actor who played him is now being portrayed in commercials for a juice drink called The Beauty Likes Pomegranate. Comic book artist Won Su-yeon, who is famous for "Full House", joined hands with Lee Joon-gi, who is growing into the Korean film world's blue chip, to portray Lee's life in a comic strip.

The curtain has already risen on part 1 of the five-part series commercial. In the first installment: despite his parent's objections, Lee Joon-gi leaves his home for the big city. He gets on the train, takes his seat, and starts thinking back on what his father said. Heaven and earth shake as his father bellows, "I didn't raise my son to be an entertainer!" But in spite of the intense objection, he arrives at Seoul Station, and says, "No matter what anyone says, I am going to go my own way". Of course the story has a happy ending.