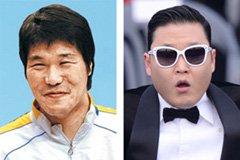 Psy is set to attend a farewell match on Tuesday for the Korean Basketball League's hottest player, Seo Jang-hoon.

"Psy will make the opening throw at the final game of the season against the Jeonju KCC Egis to be held at Sajik Gymnasium in Busan at 7 p.m. on Tuesday", said the Busan KT Sonicboom, Seo's team.

Psy will also watch a ceremony for his close friend, who is retiring at the age of 39. Seo started his career with the SK Knights in 1998 and has been a star center, playing for Samsung, KCC, ET Land, LG and KT.

The rapper returned to Korea on Sunday before his upcoming concert and the release of his new single, scheduled for April 12.

Meanwhile, "Gangnam Style" became the 129th single on the U.K. charts to sell more than one million copies last month, YG Entertainment said on Monday. Psy is the first Korean and third Asian to achieve the feat.