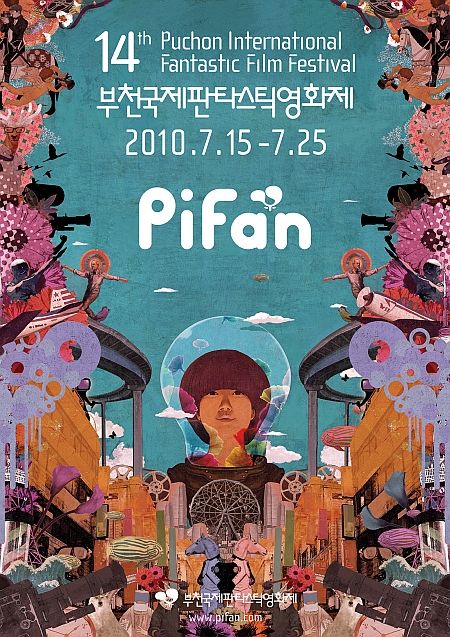 The Puchon International Fantastic Fim Festival (PiFan), one of Asia's main genre film festivals, will start today, offering 193 shorts and features from 42 countries around the world during its 11-day run.

Held under the theme of "Love, Fantasy and Adventure", the fest will kick off with an opening ceremony whose red carpet will be graced by some of the biggest names in filmmaking such Korean directors Im Kwon-taek, JK Youn, Kim Dae-seung and Min Gyoo-dong.

Scores of actors, new to veteran, are also set to show up at the evening's festivity, including Gong Hyung-jin and Choi Jung-won who will emcee the opening ceremony, Hwang Jung-eum, this year's PiFan Lady, and actress Ye Ji-won who will serve as a member of the jury in the competition for features.

After the hour-long introductory event, the opening ceremony will officially commence, headlined by "The Experiment" by director Paul Scheuring, best known as the executive producer and head writer of television series "Prison Break".

Starring Adrien Brody and Forrest Whitaker, "The Experiment" is a remake of a German production from 2001 which explores into human nature by testing 26 individuals selected as test subjects for a psychology experiment while enclosed in a temporary prison.

A total of 12 films will compete in the feature category and another dozen in shorts. They will be judged by an international panel composed of film experts with a variety of experiences including Max Tessier, a film critic who writes for well-known magazines such as Jeune Cinema and Le Monde and Patrick Frater, formerly with the Variety and the Screen International while currently the founder of Film Business Asia.

The festival will also feature a wide range of programs such as Strange Homage which pays tribute to various genre masters and retrospectives on British director Terry Gilliam and Korean action film director Lee Doo-yong.

The Network of Asian Fantastic Films (NAFF), an emerging industry-oriented program for Asian fantasy films, will run for five days from July 18. Fifteen projects which have been chosen to compete at the "It Project", NAFF's project market for genre films, where the winner will be provided investment and co-production opportunities.

The PiFan, into its fourteenth year, will wrap on on July 25 with Korean film "Death Bell 2: Bloody Camp" by director Yoo Seon-dong.

"Puchon International Fantastic Film Festival kicks off today"
by HanCinema is licensed under a Creative Commons Attribution-Share Alike 3.0 Unported License.
Based on a work from this source