Queens of musical are coming 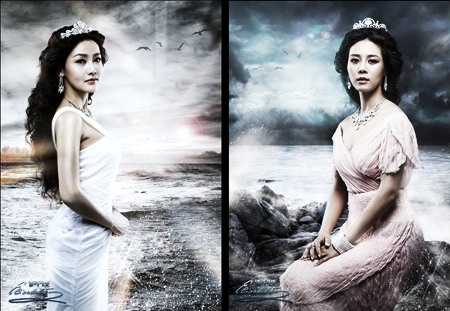 Musical divas are preparing to dominate local theater scene this winter, portraying strong women from an Austrian Empress to an Argentine First Lady to a backup singer reborn after plastic surgery.

"200 Pounds Beauty", a Korean musical based on the 2007 movie of the same name, will raise its first on Dec. 6 at the Grand Theater of Chungmu Art Hall in central Seoul.

The musical premiered in 2008 and now returns with a revamped music number and set. Actor-turned-director Lim

Chul-hyung will direct the show, adding more fun to the musical.

It tells a story of an overweight backup singer whose life totally changes after a makeover through plastic surgery. She falls in love with music producer Sang-jun who recognizes her talent but does not see her as a woman. Singer Bada, also known as Choi Sung-hee, girl band Kara's Park Gyu-ri and musical actress Jeon Hye-sun will play the lead role of Han-byeol, who later becomes top singer Jenny.

Choi successfully played the role in the 2008 premiere, holding the audience's attention with her outstanding singing ability when singing "Maria", a hit sound track from the movie. Park proved her possibility on stage at the Japanese engagement of the show in October. Jeon, who is well-known for playing Yitzhak in rock musical "Hedwig", joins the show.

The show is ready to entertain audiences with familiar songs from the movie as well as new songs and magical transformation of Han-byeol from a fat woman to a beauty. Magician Lee Eun-gyeol participated in the show for a more smooth sequence of the instant onstage transformation.

The musical is also eyes overseas market. Before raising curtain in Seoul, the show was staged in Osaka in October and is scheduled travel to China and Singapore next year.

With music of Andrew Lloyd Webber and lyrics of Tim Rice, "Evita" comes to Korea for a second time at LG Arts Center in southern Seoul from Dec. 9 to Jan. 29, 2012.

The musical portrays dramatic life of Eva Peron, the second wife of Argentinian president Juan Peron. Evita was a woman who was born as an illegitimate child but rose to the position of the nation's first lady. Her life, full of ups and downs is shown onstage with beautiful music from jazz to masses and choruses.

The set will depict downtown Buenos Aires in the 1940s, while dazzling dances scenes of tango, waltz and polka will be accompanied by a 24-piece band.

Musical diva Jeong Seon-a and Lisa Chung will share the role of the leading lady Evita. Jeong made her debut playing Mimi in the 2002 production of "Rent" and is known for her glamourous beauty. She recently played Amneris in "Aida" and Sister Sarah Brown in a revamped Korean rendition of "Guys and Dolls". Chung is a singer, artist and musical actress and performed in "Jewel in the Palace" and "Gwanghwamun Younga", with her powerful voice. They are expected to interpret "Don't Cry for Me Argentina" in a different way to add more diversity to the show. 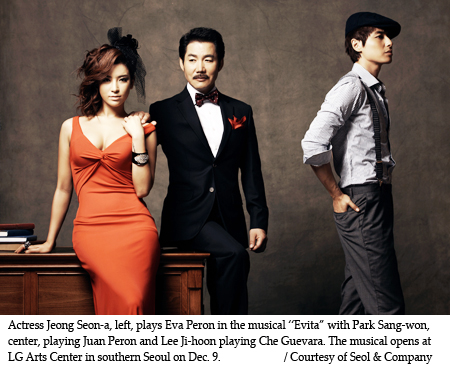 Seol & Company, in charge of the Korean production of "Evita", said the 2006 premiere broadened the type of musical audiences in Korea to middle-aged people and hopes to create the boom again this time.

For more information about the show, call 1577-3363 or visit www.musicalevita.co.kr.

Last but not least, highly-anticipated Viennese musical "Elisabeth" joins this cavalcade of theatrical feast in February at the newly opened Blue Square in Hannam-dong.

"Elisabeth" revolves around famous Austrian Empress Elisabeth, also known as Sissi. The musical incorporates a phantasmal being Death who is in love-hate relationship with Elisabeth, adding more fantasy to the dramatic story of the empress.

With music by Sylvester Levay and book and lyric by Michael Kunze, "Elisabeth" is one of the most popular non-English musicals, drawing some 9 million audiences across the globe since its premiere in 1992 in Vienna. In 2012, the show will be staged in Seoul as well as Vienna, Koln and Munchen, celebrating the 20th anniversary.

The Empress is a cultural icon in Europe, but Koreans are not so familiar with Korean wit the story. However, the German-language musical has earned popularity here among fans and some of the songs were performed at the concert "Levay with Friends" last year, raising expectations on the show.

In the Korean rendition, musical actress Kim Sun-young and singer-turned-actress Ock Joo-hyun will alternate the role of the Austrian empress. Kim is currently playing gypsy Inez in musical "Zorro" and Ock starred in MBC's "I Am a Singer" earlier this year.

Three actors were casted as Death ― Ryu Jung-han, Song Chang-eui and Kim Jun-su of JYJ. Ryu is a veteran musical actor who previously played Jekyll in "Jekyll and Hyde" and Don Quixote in "Man of La Mancha", while Song is more known for his subtle and delicate acting in musical "The Sorrows of Young Werther" and drama "Heartstrings". Kim is expected to portray a charismatic Death, coming from his abundant experience as a K-pop idol.