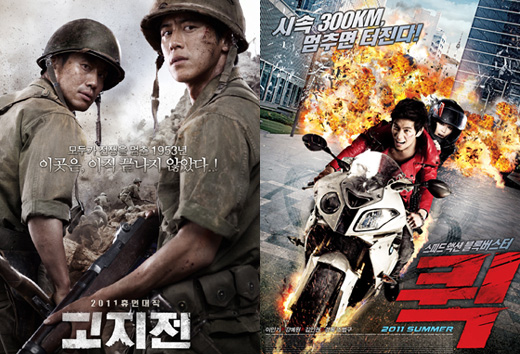 Movie "Quick" recaptured its winning possibilities from "The Front Line".

According to the Korean Films Commission, "Quick" gathered an estimated number of 2,852,973 audiences until the 15th and beat "The Front Line" which recorded 2,849,807.

The two movies are 10 billion won (~US$10 million) blockbusters which were released on the same July 20th and "The Front Line" seemed to be ahead of "Quick" but things changed with the start of August.

"Quick" is a blockbuster with Lee Min-ki and Kang Ye-won. It was directed by director Yoon Jae-kyoon and distributed by CJ Entertainment. The break-even point of this movie is 3.2 million won.

CJ Entertainment said, "If this is how things continue to be then we should be able to break even".

""Quick" recaptures victory from "The Front Line""
by HanCinema is licensed under a Creative Commons Attribution-Share Alike 3.0 Unported License.
Based on a work from this source