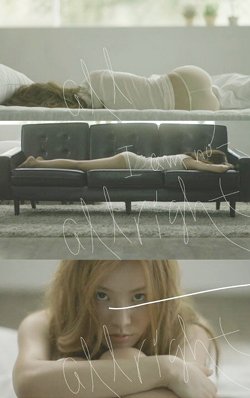 Lim Kim, best known as the female half of pop duo 2 Months, one of the finalists on Mnet's reality TV show "Superstar K" in 2011, has released a raunchy teaser video for her solo title song "All Right", just ahead of the launch of her first solo mini album on Monday.

In the video, Kim is shown in just a tank top and underwear.

"We focused on repackaging Kim as a female solo singer, rather than as part of a duo. This mini album will highlight her unique voice and the diversity of her singing range", her management agency Mystic 89 said.

"Racy Teaser Video Puts Spotlight on Lim Kim"
by HanCinema is licensed under a Creative Commons Attribution-Share Alike 3.0 Unported License.
Based on a work from this source