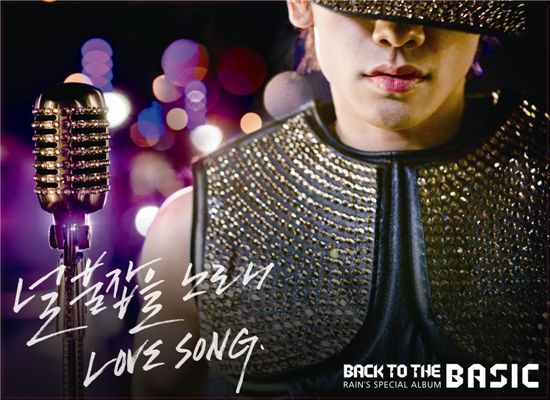 The cover of Rain's special album "BACK TO THE BASIC" [J.Tune Entertainment]

For the week of March 28 to April 3, the singer took his first crown on the Korean music chart by defeating last week's winner Girls' Generation.

Rain's ballad track has been rapidly climbing several online charts since its release on March 30. All the tracks from his special album "BACK TO THE BASIC", which came out on April 7, have placed within the top ten on various real-time music charts on the day of its release.

Girl band After School came in second with "Bang!", climbing two spots from the previous week, and Brown Eyed Soul rounded out the top three with their hit tune "I'll Move".

Meanwhile, G-Dragon triumphed on the albums chart with his special concert album titled "Shine a Light", a live recording of his solo concert held last December in Seoul.

Boy band Beast followed behind at No. 2 with their record "Shock of the New Era" while Girls' Generation's "Run Devil Run" slid down to third place from the top spot.

The Gaon music chart, considered the Korean equivalent of the U.S. Billboard chart, was launched last month. Its data has been accumulated from online and offline sales statistics from the country's major web-based providers and record distribution companies.

"Rain and G-Dragon score winning debuts on Gaon charts "
by HanCinema is licensed under a Creative Commons Attribution-Share Alike 3.0 Unported License.
Based on a work from this source