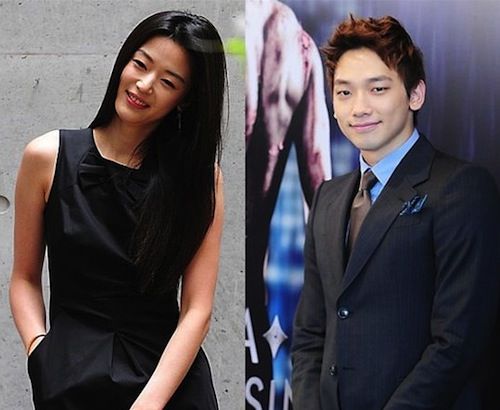 Agencies for top Korean stars Rain and Jun Ji-hyun have denied the romantic status of their stars, saying the recent news of the two dating, as one local media reported, is "not true" and "groundless".

Around 11 a.m. this morning, Sportsseoul.com released a shocking report that the two actors have been dating since last October along with a witness testimony that Rain had often visited Jeon's apartment in Seoul's affluent Samsung-dong district.

Talent agencies J. Tune Entertainment and Sidus HQ, who respectively represent Rain and Jeon, first kept mum about the news, saying only they "do not know anything" and that they will soon release official statements.

President Cho Dong-won of J. Tune Entertainment, which represents Rain, had told Asia Economic Daily over the phone that he "just heard about the news" and that he "will release an official statement after confirming facts".

Another source close to Rain called the reports untrue, saying "I have been watching Rain closely for several years and I didn't feel that he was dating anyone".

Meanwhile, Jeon's agency Sidus HQ dismissed the rumors by saying, "they are not dating" although it is true that they "have met several times" to discuss appearing in a television drama together.

Rain, whose real name is Jung Ji-hoon, is one of Asia's most popular entertainers who has achieved a phenomenal level of success in both singing and acting.

He went from being a promising trainee to a mega-popular singer and actor in just ten years, releasing six studio albums and starring in several hit television dramas.

In 2008, he went to Hollywood and made his international debut with a supporting role in the Wachowski Brothers' pic "Speed Racer", followed by a lead role in martial arts film "Ninja Assassin".

Jun Ji-hyun, whose English name is Gianna Jeon, is considered one of the most beautiful actresses in Korea. She became a household name after starring in the 2001 hit film "My Sassy Girl" which spawned a Hollywood remake.

She recently wrapped up shooting the film "Snow Flower And The Secret Fan" with Hollywood actor Hugh Jackman and Chinese actress Li Bingbing.

The news of Rain and Jeon's alleged romantic involvement caused an instant frenzy among fans who dubbed the couple "another A-list pairing since Jang Dong-gun and Ko So-young".

"Rain and Jun Ji-hyun's agencies deny dating rumors"
by HanCinema is licensed under a Creative Commons Attribution-Share Alike 3.0 Unported License.
Based on a work from this source