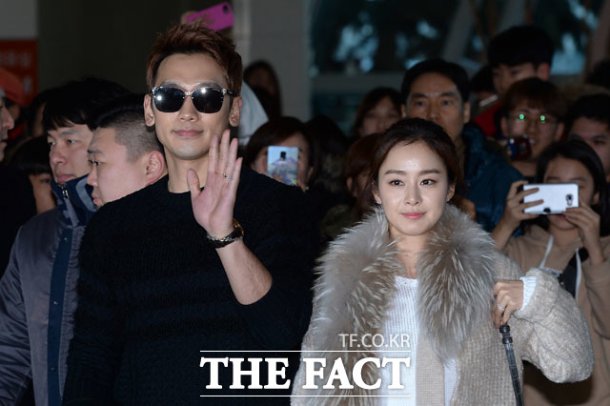 Kim Tae-hee's management announced this fact on the 23rd saying, "They got married on the 19th of January with so many blessings and now they've been blessed with a child on the way".

"Kim Tae-hee is 15 weeks pregnant and she will have to be careful for now. We thought it be best to let her fans and supporters find out directly from us rather than being told from other sources".

Kim Tae-hee made a surprise appearance on the KBS 2TV "Happy Together – Return of Superman" in December last year.

Lee Beom-soo and his children visited her in her waiting room and the actress looked at them with so much love in her eyes. She said, "I have two other siblings and my parents had a hard time raising us, but I liked it".

Lee Beom-soo asked if she wanted a boy or girl and she said, "I wanted a boy at first, but now I think a daughter who can also be your friend is preferable. I would like one boy and one girl if possible".

"Rain and Kim Tae-hee 15 weeks pregnant"
by HanCinema is licensed under a Creative Commons Attribution-Share Alike 3.0 Unported License.
Based on a work from this source