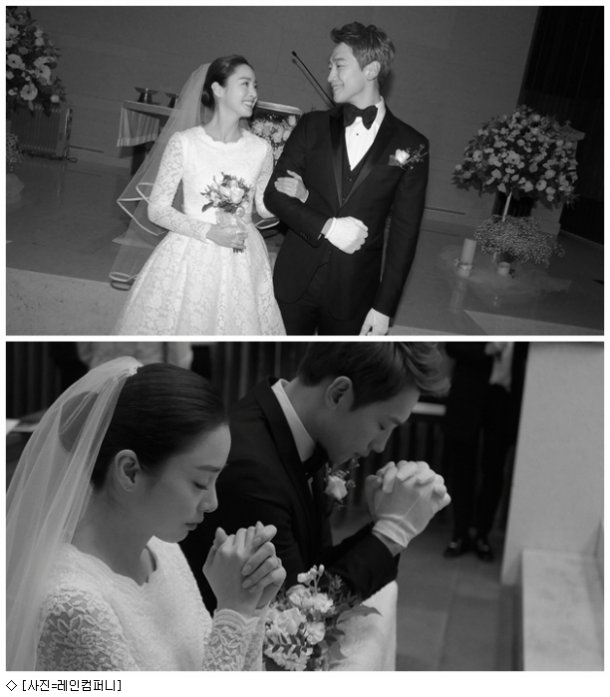 There was continuous news about issues in the show biz in early 2017. Tops stars got married, broke up and started new relationships. Also, a few number of stars got sick and last year's THAAD issue still limits Hallyu access in China today.

Top stars started getting married from early this year.

Singer and actor Rain and actress Kim Tae-hee got married in top secret in Seoul on the 19th of January. They started seeing each other in 2013 and got married 5 years later. Even their managements didn't know they were getting married. Now Kim Tae-hee is 15 weeks pregnant. 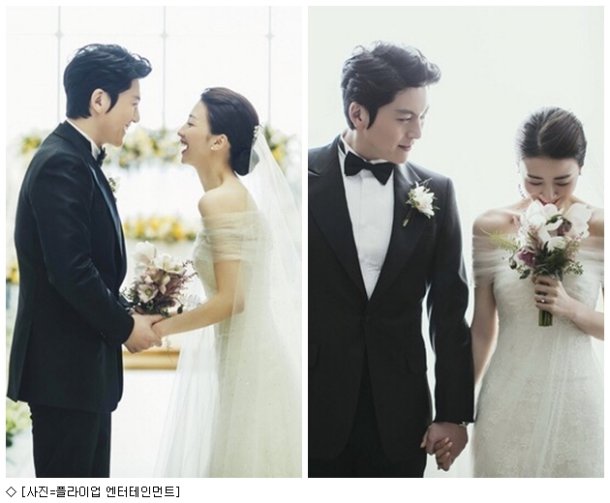 Ryu Soo-young and Park Ha-sun soon followed. They met in the 2013 MBC drama "Two Weeks" and they became lovers in real life. They met for 2 years before they got married. Park Ha-sun has been posting pictures of good and little notes her husband make for her. Park Ha-sun is also pregnant and she's due this fall. 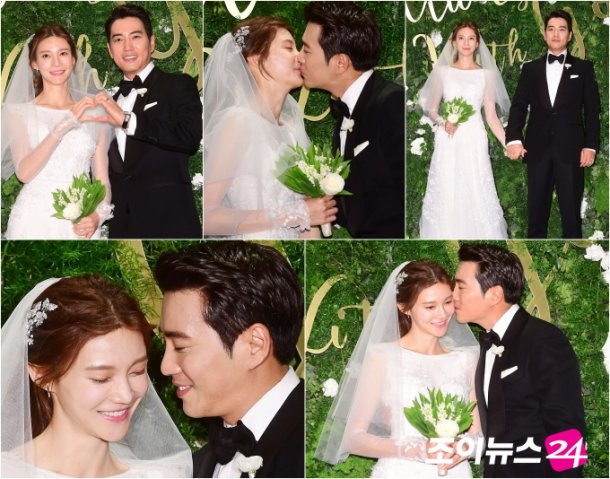 Joo Sang-wook and Cha Ye-ryun got married recently as well. They met in the MBC drama "Glorious Temptation" and announced their relationship in March last year. Cha Ye-ryun claimed she dreamed of doing housework and cooking for her husband. Apparently their wedding was carried out without a wedding planner. On the 25th of May, a picture of Cha Ye-ryun cooking in an apron was posted online and it looks like she got just as she dreamed. 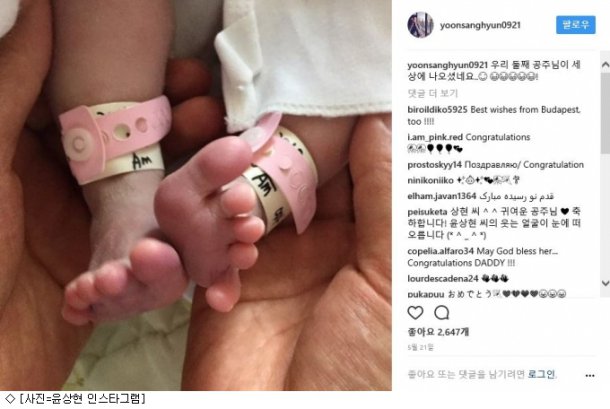 Stars have been giving birth. Actor Yoon Sang-hyun and singer and song writer MayBee gave became parents on the 21st of May. They got married in February of 2015 and had a daughter in the following December. Their second child is also a girl. At the same time, singer Baek Ji-young and Jung Suk-won had a baby girl and they were married 4 years ago.

Singers Moon Hee-jun and Soyul were blessed with a child 3 months after their marriage. They got married in November of last year. Questions rose as to them getting married because she was pregnant and they said no. However, questions turned out to be true as they had a child only 3 months after getting married.

- Relationships throughout the show biz 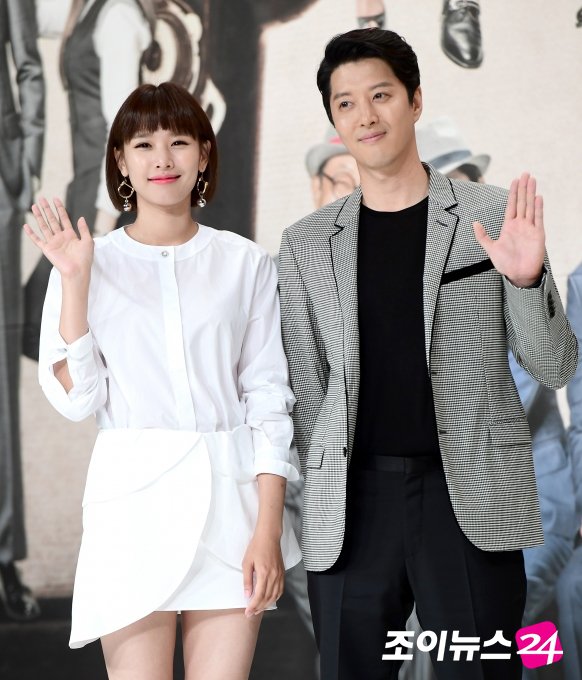 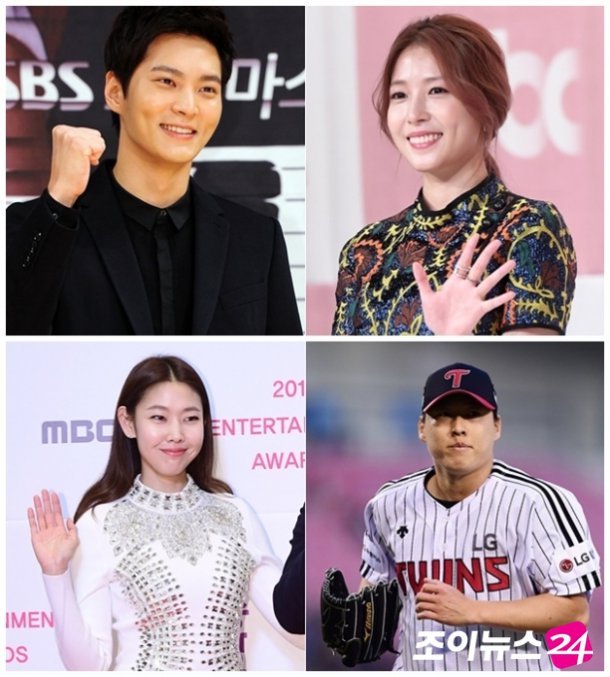 Joo Won and singer BoA also claimed they were together. They met through a group meeting in 2015 and developed from friends to lovers since May last year. They came out with this fact in January this year. Asian stars BoA and Joo Won attracted a lot of attention with this. Joo Won joined mandatory service on the 16th of May.

Model Han Hye-jin-II and LG Twins baseball player Cha Woo-chan are together. They met through a friend and developed into a romantic relationship. Actor Jo Dong-hyuk and volleyball player Han Song-yi announced they've been together a year and so did Sung Yu-ri and golf player Ahn Sung-hyun.

- Break ups in the show biz 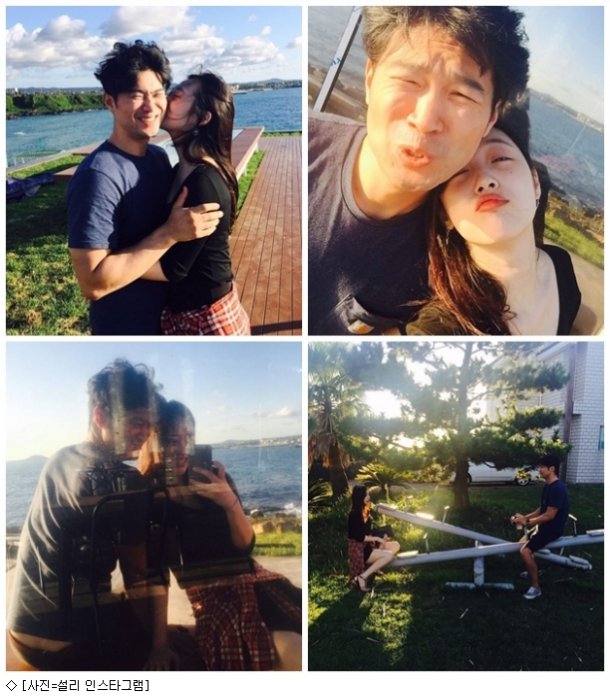 Choiza and FX Sulli broke up in March. They announced their relationship in August of 2014 but broke up after 2 years and 7 months. Their relationship alone was a big issue as Choiza is a hip hop artist while Sulli is an idol and they were 14 years apart. Sulli then quit FX and turned into a 'rebellious menace' during the time she was with Choiza.

Their break up was big. Not long after that, Sulli started seeing Kim Min-joon, a businessman who is also part of 360 Sounds, a hip hop crew. This happened short of two months after she broke up with Choiza. Critics started saying she was playing Choizan ad Kim Min-joon at the same time. Kim Min-joon and Sulli are 11 years apart but they haven't made any clarifications about their scandal yet.

IU and Chang Kiha broke up after 3 years and it made the news as they were also a couple with 11 years between them.

Shin Ha-kyun and Kim Go-eun, 18 years apart, also broke up. They announced they were seeing each other in August of 2016 but news of break out came out in March this year. The reason for break up was 'work' and 'busy'. 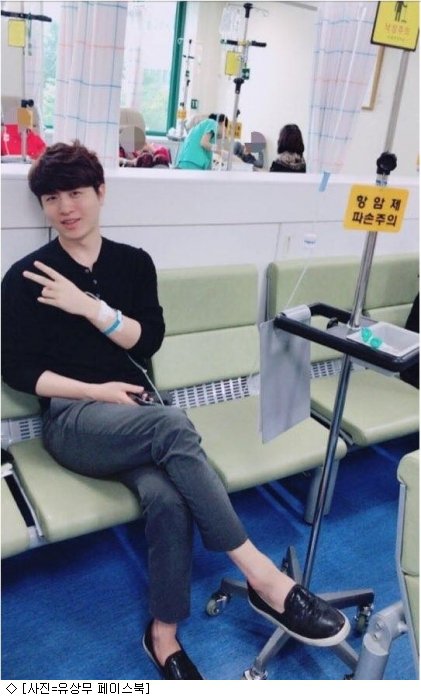 Comedian Yoo Sang-moo is struggling with stomach cancer in the third degree. He was announced sick in April and had surgery on the 10th. Before he underwent surgery, he posted on his SNS saying, "I became a comedian to bring laughter to my fans but I'm sorry I made you worry". He promised to be back to make his fans laugh. After the surgery, he posted, "I'll make it through the treatments and be back!"

Actor Kim Woo-bin is also sick. He has nasopharyngeal carcinoma and is currently in treatment. All official activities have been stopped as well as the movie "Wiretap". 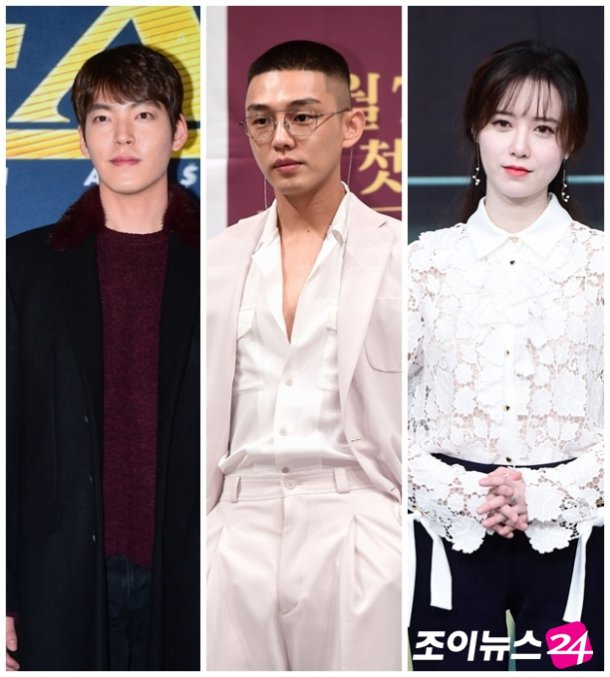 Yoo Ah-in was diagnosed with osteoncus. He was injured during the making of the movie "Tough as Iron" in 2013 and learned about his condition during a physical examination for National Service. He received a level 7 as a result and by the 22nd of May, he had received 5 more physical examinations.

Ku Hye-sun is suffering from anaphylaxis so she had to drop out from the drama "You're Too Much". Anaphylaxis is a sickness that causes allergic reactions to something.

- THAAD and Hallyu in China

When news got out that THAAD from the States was being positioned in Korea, China was outraged. It put on ban on Hallyu and the Korean show biz was hit hard. Actress Yoo In-na was kicked out from a Chinese drama that she filmed 2/3 of and Hwang Chi-yeol's part of a Chinese TV show was lifted off completely or mozaiced. The ban didn't change this year. 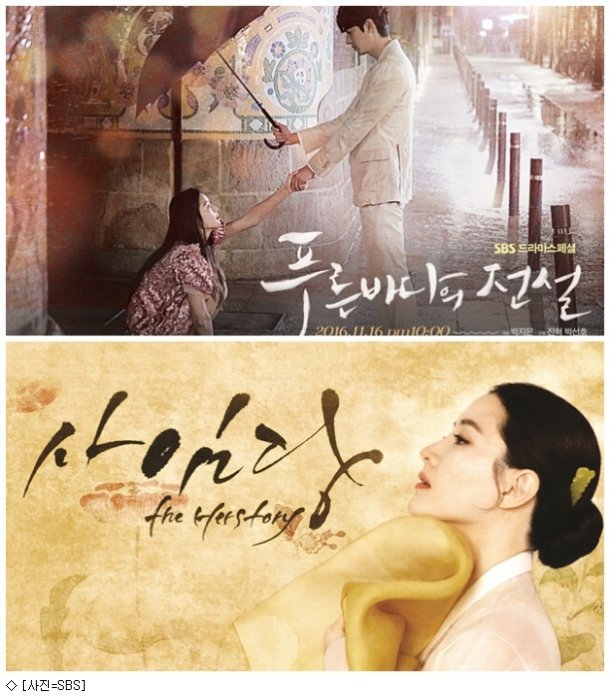 Jun Ji-hyun and Lee Min-ho's drama "Legend of the Blue Sea" was banned for export in China and Lee Yeong-ae's drama as well. "Saimdang: Light's Diary" was postponed and simultaneous broadcast in China got cancelled. "Man to Man" which is being broadcast in 190 different countries, will not be accepted in China.

There is anticipation that the ban will be set at ease with the new President Moon Jae-in in office. The President spoke with the leader of China and discussed progress in relationship between Korea and China on the 11th last month. The Chinese president requested Moon Jae-in to make a visit to China.

- Idols join the military while some come out

Many male idols have gone to serve their duties. 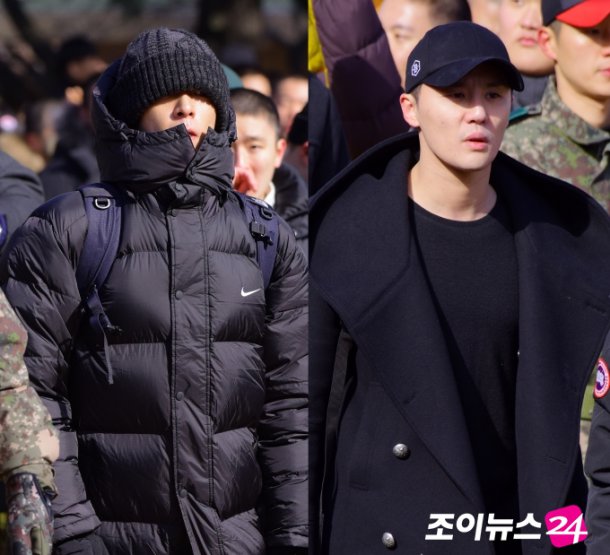 Big Bang member and actor TOP (Choi Seung-hyun) joined National Service on the 9th of February. JYJ Kim Junsu also left on the same date. 200 or so fans greeted them at the training camp in Nonsan. TOP was dispatched as government policeman at the Seoul Police Department. He posted pictures on the 27th of April. Kim Junsu was dispatched to South Kyeonggi District Office. 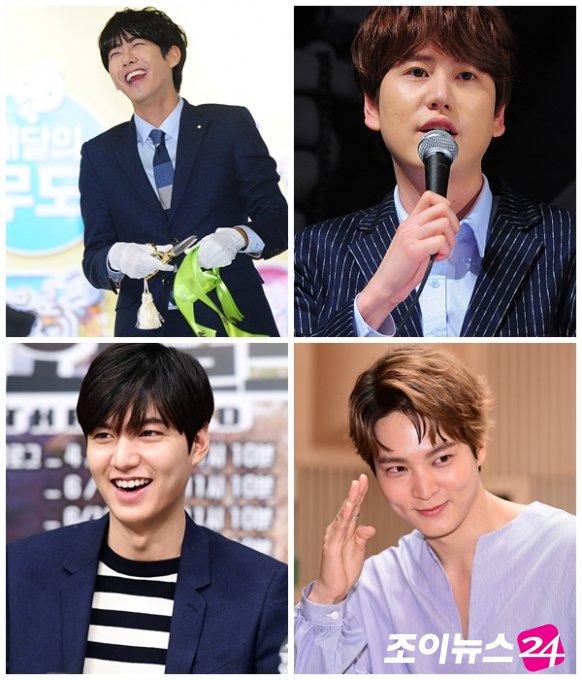 Hwang Kwanghee from ZE:A - Children of Empire also started serving duty on the 13th of March. He was one of the newest members of the TV show "Infinity Challenge". Im Si-wan posted a picture of the two of them before Hwang Kwanghee left. Kyuhyun joined National Service on the 25th of May and will be serving his duties as a public worker. He was on the MBC TV show "Radio Star".

Actors also followed. Lee Min-ho started duty at the Gangnam District Office since the 12th of May. Joo Won joined NS on the 16th of May but not before filming the drama "My Sassy Girl - Drama".

There are those who completed their duties. Kim Hyun-joong came out on the 11th of February. Before he left, he was in a legal lawsuit with his ex-girlfriend but 40 days after he came out, was caught drunk driving. Yunho from TVXQ completed his duties on the 20th of April and fellow singer Max will be out in August. 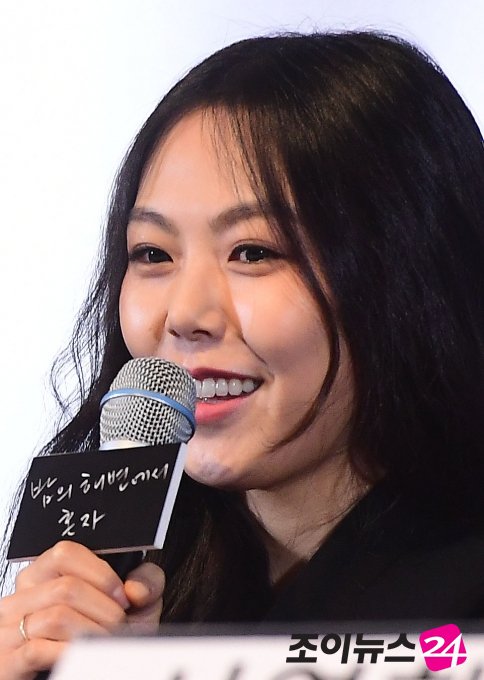 Early this year, Kim Min-hee was active in a film festival that is recognized all over the world. Kim Min-hee was the first Korean actress to be awarded the Best Actress at the 67th Berlin International Film Festivals. Although she didn't win Best Actress at the 70th Cannes International Film Festival in May, she did visit Cannes two times in a row for Park Chan-wook's "The Handmaiden" and Hong Sang-soo's "The Day After - 2017". 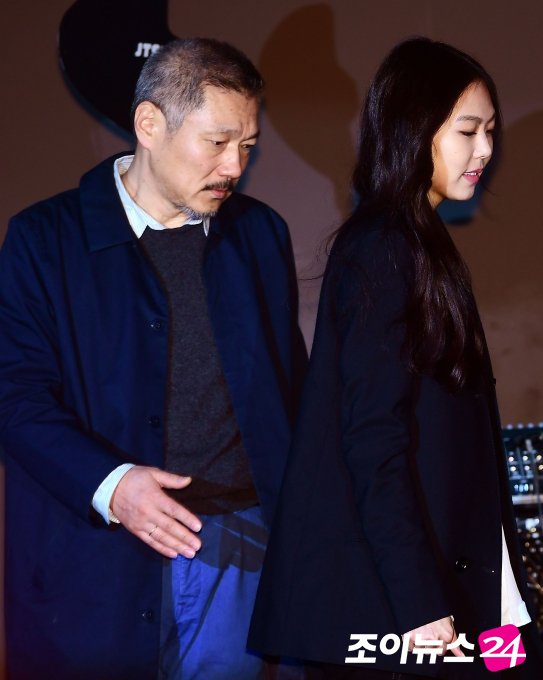 Kim Min-hee's "On the Beach at Night Alone" and "The Day After - 2017" are all Hong Sang-soo's films. In June last year, Kim Min-hee and Hong Sang-soo were rumored to be having an affair. They made a public appearance for the first time since then in March this year. Then in Cannes, they were seen together on the streets or smoking together.

2NE1, Wonder Girls and Sistar announced they are breaking up early this year. They are some of the leading girl groups today. 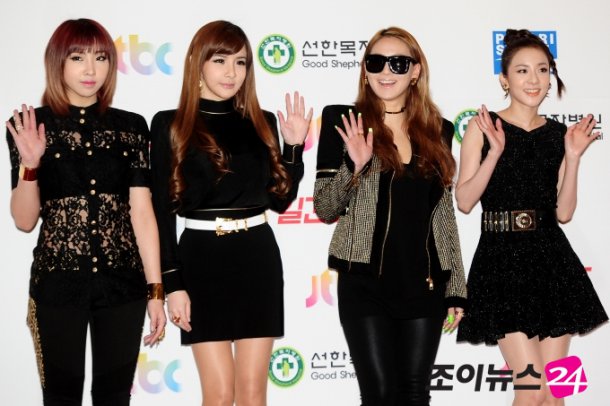 2NE1 was YG's first creation of girl groups that debuted in 2009. Their final album was a single that was released on the 21st of January. 2NE1 has a record of hit songs like "Fire", "I Don't Care", "Follow Me" and more. They have a reputation for their powerful songs which took them to fame. However, Park Bom's drug issue in 2014 led to a halt in all of the group's official activities. In the end, Gong Min-ji quit in 2016 and CL started working in America. 2NE1's final single was "Goodbye". 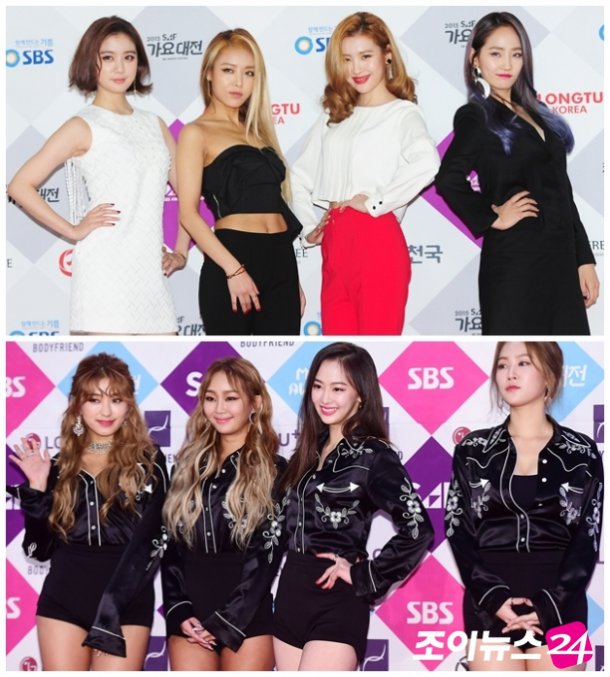 Wonder Girls officially broke up on the 10th of February which marked their 10th year anniversary. The JYP girl group released hit songs like "Irony", "Tell Me", "So Hot" and "Nobody". However, their failure to progress into the US and the stepping down of their leader Sunye became their inflection point. Hye-rim newly joined the team and the group further released albums such as "REBOOT" and "Why So Lonely" but "Draw It" turned out to be their final album.

Sistar recently announced that they were breaking up. Their final activity together will be this summer. Sistar debuted in June of 2010 with title song "Push Push" and continued to release addictive melodies. Unlike other girl groups, Sistar came forward with a 'healthy girl' look and made it their characteristic. Coming back in summer inflicted a good response from fans. Their latest big hit was "Lonely" which came out on the 31st of May last year. 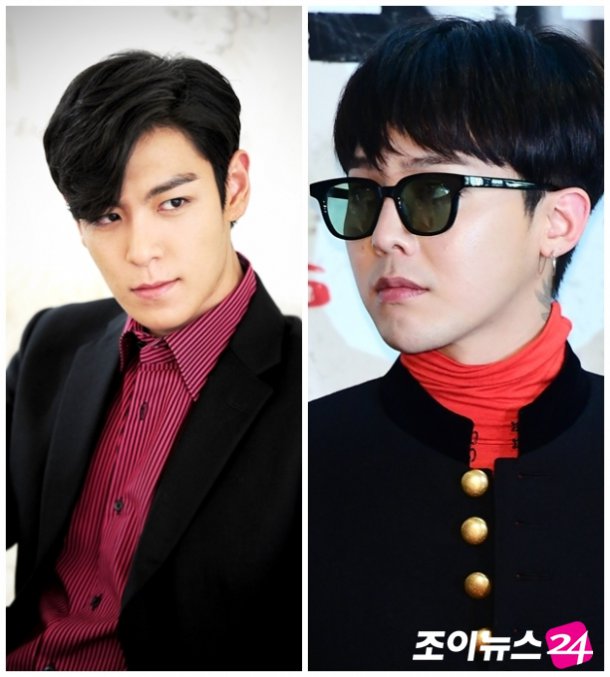 Big Bang's TOP (Choi Seung-hyun) was caught by the police for smoking marijuana.

TOP was booked without detention in May for smoking marijuana. Apparently at his house in Yongsan, Seoul with a wannabe singer A (21), TOP smoked marijuana two times and another two times in the liquid form. TOP enlisted in February and started serving duty at the Seoul Police Department but was sent to division 4 last month. He apologized for having caused disappointment in those who support him and said he regretted what he did.

Then on the 6th of June, TOP was taken to the hospital as he was found unconscious. Police said he was just overdosed on his stability pills and that he wasn't in danger. The name of Big Bang was in the headlines once again due to this matter. 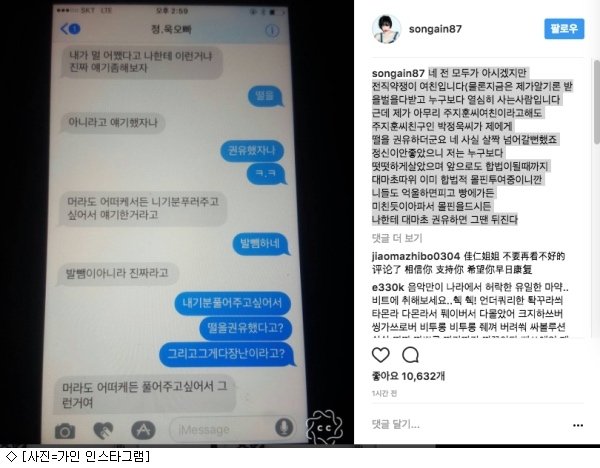 Marijuana issues in the show biz came up the surface once again. Son Ga-in posted on her Instagram on the 4th of June, "As many of you know, I am the girlfriend of a former druggie. Ju Ji-hoon's friend Park Jung-wook offered me weed. I told him I would kill him if he did that again". Ju Ji-hoon and Son Ga-in have been seeing each other since their announcement in May of 2014. Ju Ji-hoon has a record of having smoked marijuana in 2008 and paid his dues.

"Rain and Kim Tae-hee, drugs, break-ups and new relationships - Top 10 news"
by HanCinema is licensed under a Creative Commons Attribution-Share Alike 3.0 Unported License.
Based on a work from this source