Rain, foreshadowing marriage with his new single "I Love You" 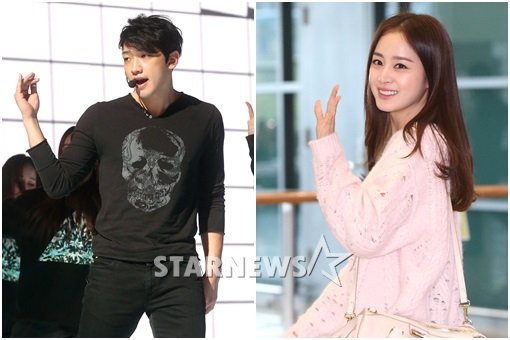 The public's eyes widened as Rain (Jeong Ji-hoon) released the song "I Love You". He's been seeing the actress Kim Tae-hee since January last year.

Some say the song symbolizes their marriage beyond love.

"I Love You" is about to be released and is a proposal song. Rain helped to write the lyrics and song. This is why it's such a bigger issue.

Did Rain really write this song for Kim Tae-hee? To tell the truth, the wedding is not yet to be.

Cube DC announced the release of a special edition of the 6th album "Rain Effect" which holds track number 6, "I Love You" and it also says Rain is yet to be married.

This fact was also mentioned by the singer himself. At the interview celebrating his new album release, he was asked if he was going to marry Kim Tae-hee and he smiled to say, "We have no plans yet". He just nodded that they were happily seeing each other right now.

Many are interested on whether they tie the knot or not. Rain is 32 years old this year and Kim Tae-hee is 34. They are of age. It's only the right that everyone thinks about marriage at those ages.

Some say that whatever Rain comes out with, links him to Kim Tae-hee. 'Rain in a relationship' means his love for 'Kim Tae-hee'.

Considering various situations, Rain hasn't planned anything for marriage yet. He thought of Kim Tae-hee when making the song "I Love You" but this song is not a proposal.

However, as much as they are in love, the question for the song still stands. Rain is sure to bring out the loveliest sound he can for this song. This is why fans look forward to the release of this song on the 7th.

"Rain, foreshadowing marriage with his new single "I Love You""
by HanCinema is licensed under a Creative Commons Attribution-Share Alike 3.0 Unported License.
Based on a work from this source