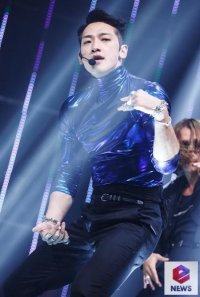 For his first Hollywood lead role in "Ninja Assassin", Rain had to forget he was a pop star and trained alongside stuntmen for six hours a day, over six months ― all when he could have been comfortably playing sweet TV roles or dancing onstage for staunch Asian fans.

His secrets to achieving zero percent body fat? Anti-fans and mom, said the 27-year-old in a crowded press conference Monday in Seoul.

"There were many times when I wanted to return to Korea, where I could be busy giving concerts and starring in TV dramas and movies. I seriously contemplated it many times over the eight months (of shooting `Ninja Assassin'.)", said Rain, who showed off his build in a fitted double-breasted suit.

But he stayed because he had made a promise to fans, and also because of his pride.

His trainers, who are now like family, would provoke him, saying that Matt Damon or Brad Pitt outperformed him in lifting 100-kilogram weights.

"I would also wake up in the morning and flip through the `very nice' newspaper articles that criticized me and read negative comments from anti-fans", he said about feeling compelled to prove himself. "I thought I had to show that I can make a debut in the United States rather than just talk about it".

The modern martial arts flick is the South Korean superstar's second collaboration with the creators of "The Matrix" series. He made his Hollywood debut in "Speed Racer", which was directed by the Wachowski brothers, and assumes his first lead role in the upcoming film, which is produced by the talented brothers and directed by James McTeigue ("V for Vendetta").

This is also the first time a local star is playing the title role in a major Hollywood franchise.

He said he pulled off 90 percent of the stunt roles, using minimal wire support. He was hurt on many occasions, and though he didn't break any bones he bears "many scars of honor".

Thinking about his late mother, however, fueled his "passion" for the project.

"My mother used to wake up at 5 a.m. every day and would work all day, come home at midnight and go to sleep at 1 or 2 in the morning. She did this for many years to support me and my sister. I thought if I can't survive this I can't do anything. This is the beginning of a new stage in my life and I cannot afford to be lazy", he said.

"I heard people get three chances in life, and I've had my three: first when I met (music producer JYP or Park) Jin-young, second when I met the Wachowski brothers through `Speed Racer' and third, when they offered me the part for `Ninja Assassin"', he said.

"I'd be lying if I didn't wish the movie to be a box office success, because everyone worked so hard. But regardless of the results this has opened a lot of doors for me, and I hope it will also open more opportunities for Asian actors, and particularly Korean actors", he said, since Asians still have "a low success rate" in Tinseltown.

Rain plays the role of Raizo, an orphan who is trained by a secret ninja clan to become a deadly killer. But when Raizo witnesses the murder of his good friend, he turns his back on his clan and plots revenge. When asked if he could relate to his character, he said he hopes he has nothing in common with such an introverted, violent persona but hopes fans will discover a new side to his conventional image.

Rain will continue his promotional tour Nov. 11 to 22 across the U.S., including New York and Los Angeles. He will then visit Hong Kong Nov. 28 and 29, Jakarta, Indonesia on Dec. 3 and finally Shanghai through the following week of December.

Meanwhile, the pop singer will hold concerts in the U.S. for the first time in three years next month, Dec. 24 and 25 at Caesars Palace Hotel in Las Vegas.

The movie, rated 18 and over, will open in theaters Nov. 26. 98 minutes. Distributed by Warner Brothers Korea.