Rain gets preview of military life in new film 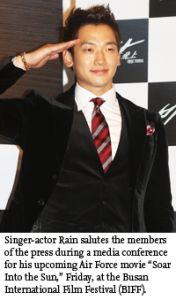 In "R2B: Return to Base", Rain, or Jung Ji-hoon as he prefers to be called for acting projects, plays a free-spirited Air Force pilot who, after pulling off a dangerous stunt during an air show, gets demoted to the combat flying team.

There he meets the unit's ace pilot (Yu Jun-sang), to whom he loses for the first time. He matures through forming new rivalry relations, friendships and romantic ties and is put to the ultimate test when the team ventures into enemy territory.

The filming process entailed intense tRaining that only the most elite minority undergo. The g-force test, which involves spinning in a machine at high velocity, proved to be especially difficult, say the actors.

"I almost fainted but regained consciousness almost miraculously", said Rain. Yoo on the other hand passed out twice before finally passing the test on his third shot. "I was like the guinea pig for the movie; because I was the youngest among those that were set to do flying scenes I always had to go first".

"R2B: Return to Base" is the first local project to feature a Boeing F-15K. It is also the first time an Asian film is portraying the Air Force.

"The movie will offer fans aerial sequences that have never been seen before in Korean cinema", said director Kim Dong-weon. He added that the film outsourced to the Hollywood team that worked on blockbusters such as "Inception" and "The Dark Knight" for the flying scenes.

For Rain, the film marks a special homecoming after working on Hollywood projects "Speed Racer" and "Ninja Assassin".

"After shooting movies in the United States I really missed speaking Korean lines again", he said. "But I was first and foremost drawn to the script and was amazed how all the actors that I thought would be perfect for the main roles ended up taking part in the film".

In addition to Rain and Yoo, other cast members include starlet Shin Se-kyung, who recently made her big screen debut in "Hindsight"; actress Lee Ha-na, who makes a comeback after a long hiatus; and popular TV drama personality Kim Sung-soo.
"We all became very, very good friends during the filming. We had a great team", said Lee. Her co-stars revealed how talented a singer she is and Lee admitted that she is working on an album to be released next year.

Shin, who appears as a mechanic, said she felt more comfortable playing her down-to-earth role, wearing minimal make-up and casual clothes. Yoo, on the other hand, said he had to work out very hard to create a muscular build for his part. It marks a break away from his usual guy-next-door roles, most notably in dramas a la Hong Sang-soo. The actor is set to appear with the seminal French actress Isabelle Huppert in Hong's next film.

"We had a lot of fun on the set but it was painful because everyone kept reminding me of how I was due for military service. I am happy though that I can leave with happy memories", said Rain.

The singer-actor will begin his stint as an active-duty solder at the Uijeongbu 306 Reserve Battalion on Tuesday.

"Rain gets preview of military life in new film"
by HanCinema is licensed under a Creative Commons Attribution-Share Alike 3.0 Unported License.
Based on a work from this source