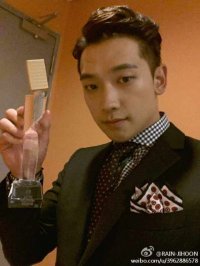 Rain, Korea's foremost entertainer recently dubbed one of the world's most beautiful people, has clinched a leading role in a Hollywood flick scheduled to begin shooting later this year, his U.S. promotion agency was quoted as saying by Yonhap News Agency.

"Ninja Assassin", to be directed by James McTeigue, will mark the first time for the 26-old singer and actor, whose real name is Jeong Ji-hoon, to play a leading role in a U.S. movie. He will make his official Hollywood debut in May with a smaller role in "Speed Racer".

"This is such a huge opportunity for me. It seems like a dream", he said at a press conference in Seoul.

Rain emerged as a worldwide star when Korea's pop culture, especially its pop music and television dramas, became hugely popular several years ago in Asia and other regions.

"We're a business with a number of artists who are really international artists, and we look at Rain as the same", said John Mass, a WMA vice chief. "He's not just popular in Korea or Asia, but he's popular throughout the world".

Rain began his singing career after releasing his first solo album, " Bad Guy ", in 2002, a huge success that was followed by other popular albums. He launched his acting career when he starred in the South Korean television drama "Full House" in 2004 and the movie "I'm a Cyborg, But That's OK" in 2006.

"Rain grabs leading role in Hollywood film"
by HanCinema is licensed under a Creative Commons Attribution-Share Alike 3.0 Unported License.
Based on a work from this source