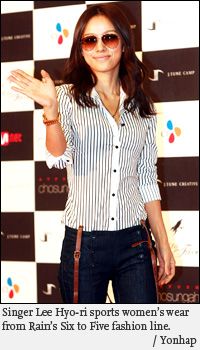 Rain has had a busy year but is about to wear a new hat: designer of his own clothing line.

The 26-year-old singer held a showcase in Ilsan last week to announce the launching of "Six to Five" with the help of fellow celebrities and fans.

Dressed in a neat black and white tuxedo, Rain explained the line's overall concept and objectives to reporters, not as a singer, but as the head designer and main model.

"`Six to Five' means that we are aiming to reach the sixth sense from our original five senses. I also wanted to use numbers to make it easier to find and comfortable to approach", he said.

Six to Five will start business in Korea and then expand elsewhere in Asia and then Europe and the United States.

"I think it's a bit unreasonable to call myself a designer. I never learned the trade professionally, but I did try to analyze the clothes I enjoy wearing and feel comfortable in. I volunteered as a designer, thinking the public may understand my views", he said.

The fashion show displayed many different items, including leather boots, denim shorts and cute tops and jackets. As Rain said, the overall style was casual and practical, with a hint of edginess shown through the use of bold colors and accessories like hats, belts and shoes.

Many fellow celebrities appeared at the event, while Rain's fans also waited to see the launching of their favorite star's new project.

Meanwhile, a local travel agency had been offering package tours including attendance at the event. More than 100 Japanese fans took the trip for 20,000 yen (approximately 300,000 won) only to find there was no room at Rain's launch as tickets had been distributed randomly free of charge and the agency had apparently acted dishonestly. Rain's agency, Jtune Entertainment, later announced that it had reported the case to police and had the travel agency reimburse the Japanese fans.

Six to Five was created by Jtune Creative, an affiliate of Rain's agency, Jtune Entertainment. The launching show will be aired on cable channel Mnet at 11 p.m. Jan. 6. Six to Five is expected to be available in selected department stores in February.

Rain will continue his busy plans next year as well, starting with a fan meeting titled "New Year Rain's Fan Meeting" in Japan early next month. Having released his album "Rainism" in six Asian countries including Taiwan, Hong Kong and Singapore, he will release the album in Japan on Jan. 7.

After wrapping up promotion schedules for "Rainism" in Japan, the singer will work on a new album set to be released in the U.S. He will then join the cast of the Hollywood movie "Ninja Assassin" for promotion in March, which is when the film is slated for release.