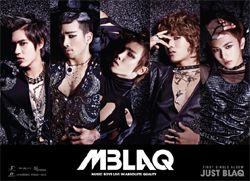 The new male group MBLAQ is to release its debut mini album on Wednesday, October 14th and make its TV debut the following day. Their first TV appearance will be on a cable TV music program, "M! Countdown". Known as the first group born out of superstar Rain's first music production effort, MBLAQ features some eye-catching member profiles. Thunder (a.k.a. Cheondung) is a younger brother of Sandara Park of sizzling 2NE1 and Mir's older sister is actress Ko Eun-ah. And Lee Joon has played younger Rain in the film "Ninja Assassin".

The five-member boy band opened Rain's concerts in Korea on October 9th and 10th. Since then the group has topped major portal site search word lists and earned nationwide attention. The music industry and Rain's fans are keeping a close eye on how the new boy group is going to fare in the tough Korean music market.

"Rain-produced MBLAQ Makes Its Debut"
by HanCinema is licensed under a Creative Commons Attribution-Share Alike 3.0 Unported License.
Based on a work from this source