Rain's "The Fugitive Plan B" outruns competitors in a breeze 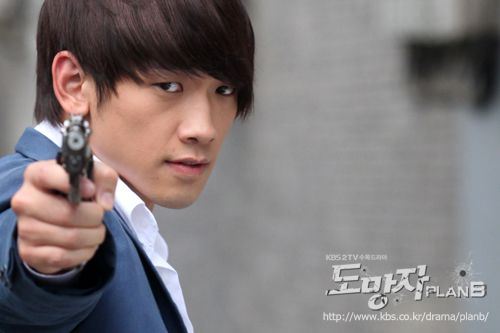 A scene from KBS TV series "The Fugitive Plan B" [KBS]

The first episode of KBS TV series "The Fugitive Plan B" starring Korean superstar Rain has proven the hype surrounding the drama ahead of its premiere may not be hollow expectation.

Statistics released by research firms TNmS (Total National Multimedia Statistics) and AGB Nielsen Media Research on Thursday showed that the premiere episode of "The Fugitive Plan B" yesterday posted viewership ratings of 21.7 percent and 20.7 percent, respectively, rare scores for even the most popular shows to record from the start of their run.

"The Fugitive Plan B" also easily outscored its competitors in the same Wednesday and Thursday primetime time slot; SBS' "My Girlfriend is Gumiho" lost steam last night ahead of its finale episode today with ratings of 18.6 percent on TnMS' survey and 16.6 percent on AGB's chart, and "Naughty Kiss" remained in the four percent-range on both polls.

In "The Fugitive Plan B", a romantic comedy investigative action series about a conspiracy involving a hefty sum of money going missing in times of the Korean War 60 years ago, Rain plays Gee-woo, a private detective at an international secret agency who is on the run after becoming pegged as the murderer of his own old friend.

"Rain's "The Fugitive Plan B" outruns competitors in a breeze"
by HanCinema is licensed under a Creative Commons Attribution-Share Alike 3.0 Unported License.
Based on a work from this source