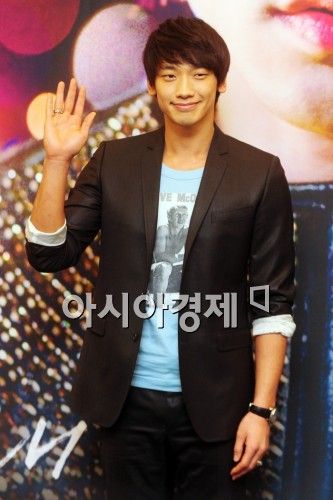 Asian superstar Rain has become the first Korean celebrity to score a nomination for the MTV Movie Awards, according to his agency J. Tune Entertainment on Thursday.

J. Tune announced in a press release that the singer was named one of the five nominees in the "Biggest Badass Star" category alongside Hollywood heavyweights such as Angelina Jolie, Channing Tatum, Chris Pine and Sam Worthington.

The nominee line-up was selected by fans, who cast online votes on MTV's website to pick their favorite "badass" actor out of 22 potential nominees.

Another round of fan voting will be carried out from May 13 to June 5 to select the final winner who will be announced at the awards ceremony on June 6 in Los Angeles.

The singer was also applauded for his acting chops when he appeared in several TV dramas such as "Sang Doo! Let's go to school" (KBS, 2003) and "Full House" (KBS, 2004) and in Park Chan-wook's surrealist pic "I'm a Cyborg, But That's OK".

In 2008, Rain made his Hollywood debut through a supporting role in the Wachowski Brothers' pic "Speed Racer". He reportedly made such a great impression on the famous sibling duo during the filming of "Speed Racer" that they offered him the lead role in last year's martial arts flick "Ninja Assassin".

Despite the film's negative reviews and box office failure in the U.S. and Korea, his top billing in the film brought the Korean star international recognition and stardom worldwide.

"Rain scores first nom for MTV Movie Awards"
by HanCinema is licensed under a Creative Commons Attribution-Share Alike 3.0 Unported License.
Based on a work from this source