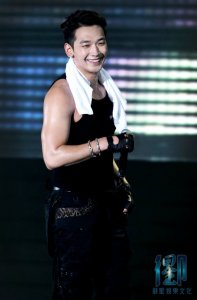 Rain, set for world concert tour, poses at the U.N. Plaza in Manhattan on May 11.
Korean pop singer Rain will make his Hollywood debut in May 2008, playing an Asian car racer in an action adventure.

Rain has already gained popularity throughout Asia for his good looks, vibrant dance moves and soulful tunes. He also played the lead role in the 2006 Korean film "I'm a Cyborg, But That's OK".

His first American film, "Speed Racer" by "The Matrix" creators Andy and Larry Wachowski, is based on "Mach Go Go", a 1960s Japanese comic book and cartoon series about car racing. The projected budget is 300 billion won.

Rain will participate in a pre-production press conference for the movie in Berlin on May 31. The event will be attended by more than 100 global news media and Hollywood stars inlcuding Susan Sarandon and John Goodman.

"It's my first movie in Hollywood and I'll do my best as a starter", said Rain.

The Wachowski brothers plan to shoot the new film in Germany in June and Warner Bothers plans to release it in May next year, AP news reported.

Rain will join the shooting after he finishes his world tour from May to June.

The movie is expected to produce another Hallyu (Korean Wave) star who made the cross over to Hollywood movies, following Park Joong-hoon in "The Truth about Charlie", Jun Ji-hyun in "Blood: The Last Vampire", and Jang Dong-gun in "Laundry Warrior" ("The Warrior's Way").

Rain's concert tour starts in Japan on May 25 and concludes in the U.S. in June. Rain's tour in the U.S. will include stops in Atlanta, Honolulu, Los Angeles, New York, and San Francisco.

"Rain secures role in Hollywood action film"
by HanCinema is licensed under a Creative Commons Attribution-Share Alike 3.0 Unported License.
Based on a work from this source