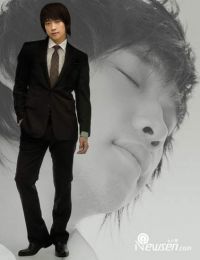 Korean pop star and actor Rain signed a one-year contract with Samsung Electronics, the official sponsor for wireless communications at the 2008 Beijing Olympics.

Yonhap News quoted Rain's management agency J Tune Entertainment as saying Rain will be the model for Samsung Anycall's advertising campaign for the Beijing Olympics. He will also sing Samsung Anycall's Olympic commercial theme song, as well as appear in billboards and posters.

Rain is one of the most popular Korean stars in China, because of his roles in TV dramas such as "Full House". He has appeared in advertisements for Pepsi, DHC cosmetics and Chinese confectionary brand Fuma. He also appears in the highly anticipated Hollywood film "Speed Racer" this year.

Rain was earlier rumored to have been asked to perform official song for the Olympics ― but this turned out to be false. He has clarified that a Chinese agency asked him to record a "candidate song" that will be submitted for consideration by the Olympic committee.

"Rain Signs for Samsung's Olympic Campaign"
by HanCinema is licensed under a Creative Commons Attribution-Share Alike 3.0 Unported License.
Based on a work from this source