Rain to hold encore concerts in Japan in July 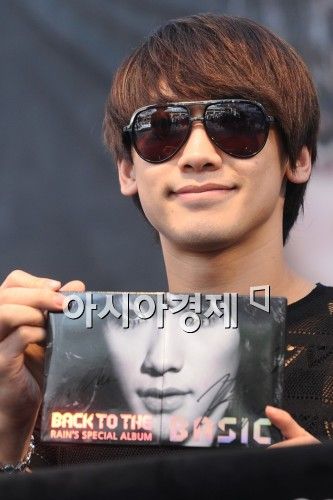 Asian superstar Rain will be holding encore concerts in Japan this summer at the request of his fans, according to his agency J. Tune Entertainment on Tuesday.

J. Tune announced in a press release that the singer is set to perform at the Saitama Super Arena on July 17 and 18 as part of his tour titled "Rain, LOVE TOUR 2010".

The concert, which will take place at a 30,000-seater venue, will feature the biggest -scale performance given yet by the singer.

His recent Tokyo concert, held at Yoyogi National Gymnasium on April 17 and 18, was a smash hit that left the fans chanting for encores for half an hour.

The singer was also applauded for his acting chops when he appeared in several TV dramas such as "Sang Doo! Let's go to school" (KBS, 2003) and "Full House" (KBS, 2004) and in Park Chan-wook's surrealist pic "I'm a Cyborg, But That's OK".

In 2008, Rain made his Hollywood debut through a supporting role in the Wachowski Brothers' pic "Speed Racer". He reportedly made such a great impression on the famous sibling duo during the filming of "Speed Racer" that they offered him the lead role in last year's martial arts flick "Ninja Assassin".

The multi-talented entertainer, who recently made a comeback to the local music scene with the album "Back To The Basic", has been sweeping numerous music charts with his ballad single "Love Song".

"Rain to hold encore concerts in Japan in July"
by HanCinema is licensed under a Creative Commons Attribution-Share Alike 3.0 Unported License.
Based on a work from this source