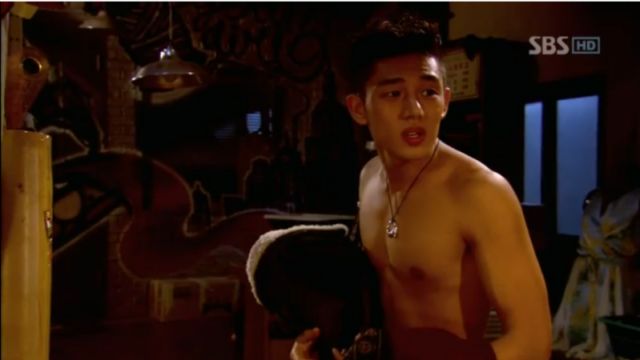 So it wasn't really what I expected it to be although it was predictable. I can say that it was a fun opener after the first fifteen minutes. They certainly laid down quite a few tropes. But you know what, that's cool. Just don't throw the other half of the book at us later.

We begin with Kang Young-gul at a runway show drawing sketch notes of the latest fashion and being generally adorable. He faxes his notes back to his shop and they get cracking on replicas. Rip-offs of the runway show show up everywhere.

Fashion designer Tory Burch makes a cameo as part of an acceptance committee for a New York University. They go gaga over an applicant's work. Who is she? Female lead, Lee Ga-young .

Ga-young is working quietly at a boutique and preparing for a show amongst a gaggle of gossiping ladies. She peers out the window and spots the mailman speeding away. Racing down the stairs, she arrives moments after a black-gloved hand has taken the mail.

A rather snooty-looking woman is opening the mail, Madam Jo , and spots Ga-young's letter. She uses a magnifying glass to read it. (Seriously? That's hysterical, Cruella. Yes, she's Cruella. She has black gloves, holds her monocle like a cigarette and has gaudy make-up. Oh yeah, she's illegally opening other people's mail. She's bound to be evil.)

Madam Jo hides the letter when Ga-young comes in and replies coolly when Ga-young inquires after the mail. She is waiting for a letter from a university in the U.S. and if she gets in, she would like to borrow the money for the plane and the first semester - she will repay Madam Jo no matter what.

The admission incites Madam Jo who thinks Ga-young is only after money and that she kept her application a secret. If she gives Ga-young the money and she fails, what then? When Ga-young leaves, Madam Jo rips up the letter.

A group of six saunters into Madam Jo's boutique lead by Madam Jo's daughter, Shin Jung-ah. She doesn't really care if her mother catches her and the kids get to partying. (Oh, I sense mommy issues...but who wouldn't have them with Cruella for a mother?)

The smoke wakes Ga-young up and she tries to put out the fire, to no avail.

Of COURSE, her boss shows up, and Madam Jo is pissed. She slaps Ga-young across the face and accuses her of setting the fire as revenge for refusing to loan her money. Another employee, Miss Go, tries to defend Ga-young, but is reprimanded. Ga-young denies setting the fire and Madam Jo kicks her out. She fed her, clothed her and sent her to school. She's done enough. If Ga-young wants to go abroad to avoid her, then she should leave.

Ga-young agrees to leave, but thinks she deserves to have a part of the business since her parents started it. Madam Jo is shocked and replies that she should've just reported Ga-young to the police for arson. Besides, Ga-young's parents owed her money so SHE should be the one asking for money.

Alright, she is Evil Boss. Ga-young needs to stand up to Evil Boss now. Oh no, she can't. It's only episode one and the tenacious heroine never learns to be tenacious a little faster until about...oh...episode 19.

Ga-young wanders around Seoul and ends up in the Dongdaemun Market where she sees a sign advertising for a sewing professional. She heads on over to the shop, named Young Girl and knocks on the garage door. A buxom woman, the head seamstress crawls out beneath the garage door. BWAHAHA!

"[Raine's Recap] Fashion King: Episode 1"
by HanCinema is licensed under a Creative Commons Attribution-Share Alike 3.0 Unported License.
Based on a work from this source