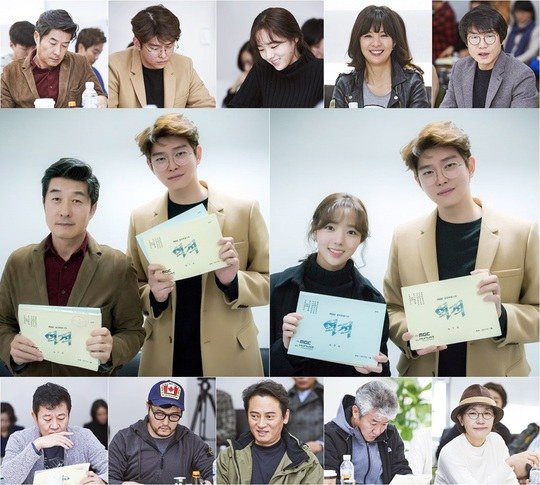 The new MBC drama "Rebel: Thief Who Stole the People" had its first script reading.

The 30-episode MBC drama started its script reading with a speech from the director of the MBC Drama Department and director Kim Jin-man.

All the actors got into their roles and expressed their tones, speech and gestures exactly the way they should according to the scripts. Kim Sang-joong caught everyone's attention with his calm tone and did an amazing job with Shin Eun-jung who is his wife in the drama. Yoon Kyun-sang and Chae Soo-bin also put on outstanding performances.

Park Jun-gyu and Lee Joon-hyuk were great together as they exchanged ad-libs and anticipation of the drama.

After the reading, Kim Sang-joong said, "The start of "Rebel: Thief Who Stole the People" is the beginning of history. I expect everyone to work hard and create a masterpiece". Yoon Kyun-sang said, "I hope I don't bring nuisance to the drama and I hope it turns out well".

Meanwhile, "Rebel: Thief Who Stole the People" re-highlights the life and love of Hong Gil-dong who lived the life of aggression during the Yeon San-goon period.

""Rebel: Thief Who Stole the People" Kim Sang-joong and Yoon Kyun-sang "
by HanCinema is licensed under a Creative Commons Attribution-Share Alike 3.0 Unported License.
Based on a work from this source