"Rebel: Thief Who Stole the People" Yoon Kyun-sang and Kim Ji-suk face each other for the first time 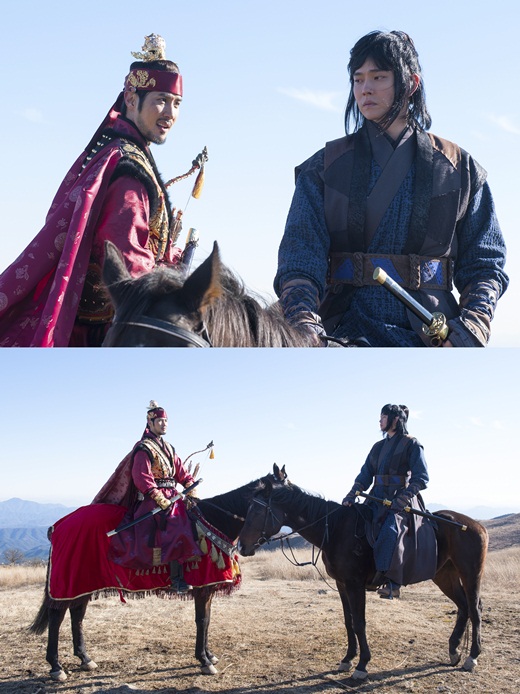 Yoon Kyun-sang and Kim Ji-suk shot the new MBC drama "Rebel: Thief Who Stole the People" for the first time on the 28th of December.

"Rebel: Thief Who Stole the People" re-highlights the life of Hong Gil-dong, a real existing character during the Yeonsan era. He was born poor but earned the trust of civilians. Yoon Kyun-sang plays Hong Gil-dong and Kim Ji-suk plays Yeonsan-gun who was born rich but didn't have the faith of the civilians. The drama points out what a leader needs to do to earn the faith of his people.

The first take was of Yeonsan-gun and Hong Gi-dong facing each other for the first time.

The two actors finished their script reading and despite the director's "OK" on the first take, they decided to re-film it.

Yoon Kyun-sang and Kim Ji-suk got comfortable with each other quickly. During breaks they would discuss the scenes and when the cameras started rolling, they turned on each other like the rivals they are in the drama.

Kim Sang-joong in the role of Amogae was also at the Mountain Hwangmae before them. Amogae is a character who struggles to make his son avoid his fate.

Director Nam Goong-Seong Woo said, "This location is where "Jumong", which rated over 50%, was taken. It means a lot. I feel like we have the energy of "Jumong" with us. It was a warm day and we are off to a good start".

Meanwhile, "Rebel: Thief Who Stole the People" will start after "Night Light".

""Rebel: Thief Who Stole the People" Yoon Kyun-sang and Kim Ji-suk face each other for the first time "
by HanCinema is licensed under a Creative Commons Attribution-Share Alike 3.0 Unported License.
Based on a work from this source