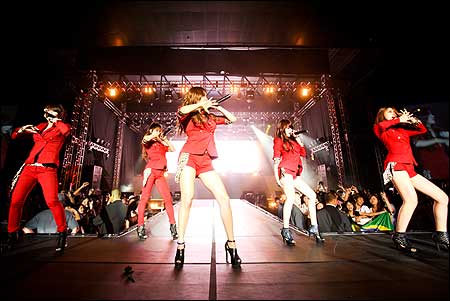 Critics may have downplayed the phenomenal spread of Korean pop music overseas, but this uncanny story of five-member girl group 4minute makes a strong counterargument.

At the beginning of the year, a clip of Italian pop singer Alex Palmieri's performance caused quite a stir around the web.

Why? Because the track in the video, "Disco Music" from his album "Move", was a beat-bybeat copy of the Korean group's 2009 single "Muzik". K-pop fans pursued an investigation and found out that most of the album by the 20-something Italian was illegally borrowed from a handful of K-pop hits, often too blatant not to notice.

In an interview last week in their Cheongdam-dong studio in southern Seoul, the five members Son Ji-hyun, Heo Gayoon, Jeon Ji-yoon, Kim Hyun-a and Kwon So-hyun were the ones downplaying the mini-controversy.

Imitation was the best form of flattery, they said.

Any K-pop group has a long way to go before they become a household name around the world, but as the abovementioned tale shows, 4minute is at the forefront of the music wave.

They hold their ground their own way, they said; they do not always play to the tune of the industry. In comparison to other active groups, they do less public appearances. They release new material only once a year, instead of peppering the calendar with new singles, EPs, full-length albums, teasers and movie or TV drama soundtracks.

In a time when fresh new faces and star hopefuls appear virtually every week, this is quite a risky move. Are they so bold - in the third year of their career - to think they are invincible in this hyper-competitive industry? But with the average age of the members barely over 20, they seemed to be concentrating more on having a good time. Fame is great, they readily admit, but it is a bonus.

"We're surprised to see so many people come to our shows overseas", says Kwon, 17, the youngest of the group.

Chuckling among themselves, others added an anecdote from a performance in Sao Paulo, where a girl fainted and had to be carried away.

As long as they maintain this happy-go-lucky mindset and continue to express themselves freely through their music and dance, the group's future holds a great many promises and a lot more fans swooning.