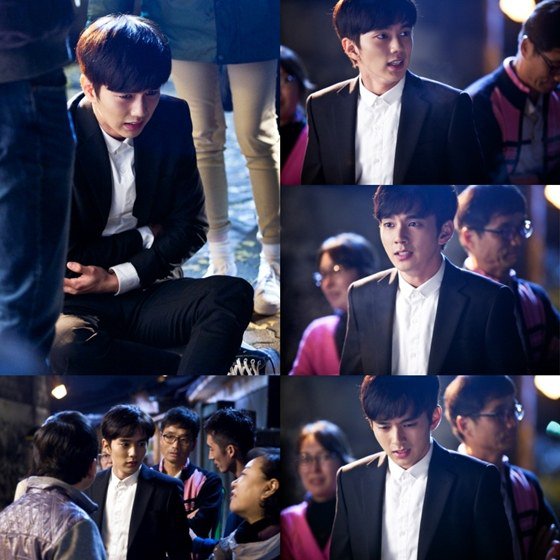 Actor Yoo Seung-ho is causing a wave of discussion.

Stills of the new SBS drama "Remember" starring Yoo Seung-ho as Seo Jin-woo were released on the 26th.

Yoo Seung-ho is crying amidst cold stares from the neighbors in the stills.

Seo Jin-woo is being taunted 'the killer's son' when Jun Kwang-ryul, in the role of his father Seo Jae-hyeok, was pointed out a suspect for the college student murder.

Yoo Seung-ho is claiming that his father is innocent and that the people don't know anything about him. There was even a struggle with one of the neighbors. He expresses his guilt with his eyes and falls to the cold ground and cries.

The 'nation's little brother' Yoo Seung-ho is usually a favorite amongst everyone but this scene says so otherwise which caused all the staff to joke that it was out of the ordinary.

The scene took place until late on a cold day. Yoo Seung-ho was only wearing a thin suit sitting on the cold ground. However, he didn't complain once and smiled for everyone even though there were times he had to standby every once in a while.

All the staff complimented that he is a dutiful, young man.

Logos Film said, "Individual skills are important but teamwork is bringing about even better synergy. Everyone is doing their best in the cold weather and we hope this delivers to the viewers".

Meanwhile, "Remember" is the story of a genius lawyer who struggles against authority to free the name of his father who was framed.

""Remember" Yoo Seung-ho's realistic performance"
by HanCinema is licensed under a Creative Commons Attribution-Share Alike 3.0 Unported License.
Based on a work from this source