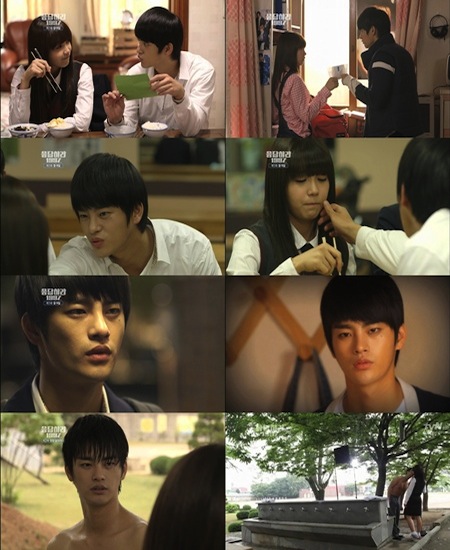 Known as the 'memory reviver' for the 20s to 30s, cable tvN drama "Answer Me 1997" Seo In-guk melted hearts with his 'Kyeongsang-do romance' from the very beginning.

On the episode of this drama on the 24th, Yoon-je (Seo In-guk) started to feel something confusing for his childhood friend Si-won (Jung Eun-ji) and was reviewed that he did his part well.

He had portrayed the blunt Kyeongsang-do guy very well with controlled expressions and lines. On this day's episode, the two friends who were so close they knew everything about each other looked back on the existence of their friendship once again as they experienced a few things as secondary sex characters.

Yoon-je kissed Si-won out of the blue to see if what he felt was first love and increased expectations between the two of them. Not only that, the actions he displayed for Si-won showed that he was indeed a Kyeongsang-do guy who was suffering from love. He wiped off something on her face for her and purposely turned around to avoid the fact that she was getting along well with another guy friend and such.

Netizen's say, "Seo In-guk's Kyeongsang-do romance is attractive", "Love is always a sad ending", "I watched this with a pleased look on my face because it reminds me of me in the past" and more.

Meanwhile, "Answer Me 1997" is aired every Tuesday at 11PM and on the third and fourth episodes were Hak-chan (Eun Ji-won). The first and second episodes will be replayed on the 30th at 11PM.

""Respond 1997" Seo In-guk's Kyeongsang-do romance"
by HanCinema is licensed under a Creative Commons Attribution-Share Alike 3.0 Unported License.
Based on a work from this source