[REVIEW] "All My Love" - First Episode 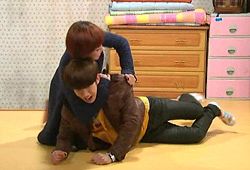 MBC Sticom "All my Love" [MBC]

When Mi-sun (Park Mi-sun), a widowed mother of twins Geum-ji (Son Ga-in) and Ok-yeop (Jo Kwon) gets kicked out from a small room she lived in with her children, she tries to turn her life around by marrying Gap-soo (Kim Kap-soo), the head of a rich private education institute. That is how new MBC sitcom "All my Love" can be summarized but it premiered with several shaky elements.

Although Park Mi-sun has appeared in a couple sitcoms starting with SBS' "Soonpoong Clinic" in 2000, her impact in the acting field has never quite had the impact she usually has on variety shows. Son Ga-in and Jo Kwon who are popular from their pairing as a make-believe husband and wife on MBC's reality TV show "We Got Married" have suddenly become twins in the sitcom. And moreover, in this sitcom that parodied KBS drama "Cinderella' Sister", actor Kim Kap-soo who played the benevolent father in the aforementioned drama, now has to act a totally different character while being in the same situation.

But the sitcom has turned out to be more interesting than expected. If the part on Geum-ji walking around in fake designer shoes to pretend she is a rich girl but later reappearing as as a delivery girl of a small hot broth restaurant was a scene that is predictable of sitcoms, the part on Geum-ji discussing her eyelid surgery with a doctor was funny in an ironic sort of way because it reminded the viewers of what Son Ga-in herself went through before debuting as a celebrity. The script was also refreshing in the sense that instead of having Jo Kwon reenact his so-often seen frivolous image and his role with Son Ga-in as a petite-sized married couple from the other show, it added life to the two's new relationship as brother and sister by showing them fight like cats and dogs. Plots like how Geum-ji's hard-earned money for her eyelid surgery got siphoned off by her brother Ok-yeop, only to be siphoned off again by their mother Mi-sun and how Gap-soo was blocked by his employee Yoon Seung-a from using the toilet in his own institution, shows that the show stays faithful to the basic structure sitcoms follow as in providing moments of humor here and there. Then again, the script was written by Park Min-jeong, one of the early script writers to the popular cable program "Rude Miss Young-ae".