[Review] I Saw The Devil: revenge at any cost 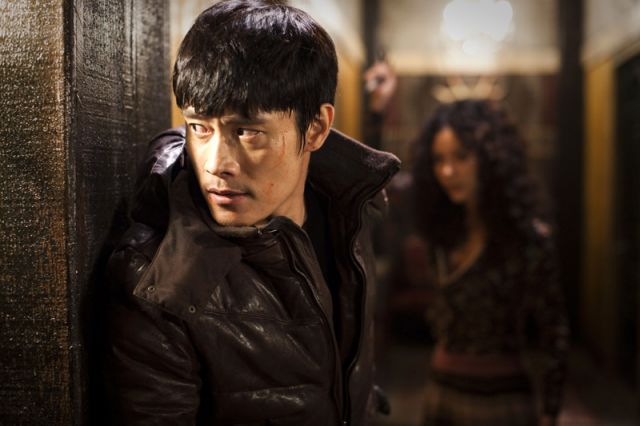 Soo-hyeon unaware at the cannibal's home

Choi Min-sik is back as the psycho killer in the murder-thriller "I Saw the Devil". Min-sik's character, Kyung-chul is cold, ruthless and deceptive. In the opening scene Kyung-chul is seen assisting a young woman with a flat tire. Soo-hyeon, the fiancé of the woman in the car talks with her on the phone as she waits for a tow truck. She begins to get suspicious when Kyung-chul ominously hangs outside her car window. He strikes with brutal swiftness with a hammer, knocking her out. Later he drags her back to his kill-house where he hacks her up despite her calls for mercy.

Soo-hyeon is distraught, however with a calm determination, armed with information on the possible suspects, he begins a campaign of vigilante justice against the four suspects which the police identified. He eventually breaks into Kyung-chul's creepy secluded dwelling, where he finds his fiancée's engagement ring, his suspicions are confirmed. The police rush to his place of employment, where he is a school shuttle driver. He receives a message that he is fired, and with one girl left in his shuttle, he decides to rape and murder her. This is where Soo-hyeon's first face to face encounter occurs. After an epic fight he knocks the killer out, and jams a small GPS detector into his throat. In a stroke of good fortune, the girl escapes.

Every time the killer is about to strike again, Soo-hyeon comes back to beat him, cut him up, taunt him, and make him ever more miserable. Slowly he wears him down, leading one to believe that the title actually refers to Soo-hyeon, rather than Kyung-chul. Again, just like in many other Korean films, the rich are depicted as despicable, sick people. On the side Kyung-chul is feeding the habit of a wealthy friend who enjoys eating human flesh. He even keeps a girl chained up and on a leash, for the purpose of slaughtering at his discretion.

The tables turn and Kyung-chul goes for Soo-hyeon's family, in other words his fiancée's family. Slowly Soo-hyeon becomes more brutal himself.

From an analytic view point, this film doesn't make much sense. The main character appears to represent righteousness, at least at first, and he gets many chances to turn the killer in and do the right thing, but he never does. Eventually Kyung-chul figures out who is after him. Soo-hyeon receives pleas from his deceased fiancée's family to stop his game but he doesn't, then the wrath is turned on them. In my opinion Soo-hyeon is actually quite selfish, and self-righteous. His revenge comes at the expense of others.

His catch and release strategy, doesn't make a whole lot of sense either, and at times it looked like a ploy to simply fill the running time requirement. Upon releasing Kyung-chul the first time, he immediately murders two people in a taxi cab. Thereafter, while he is waiting to attack Kyung-chul again he allows a girl to be sexually assaulted, only to release him again.

Soo-hyeon's character is obviously at conflict with himself. His character displays a mixture of goodness, evil, and masochism. His character only began to portray these characteristics after he had been on the hunt continuously for Kyung-chul.

In the end however, Soo-hyeon is wishy-washy and unpredictable, despite the appearance of a well-trained special agent. Kyung-chul on the other hand stays the same; always brutal, always cold, always sick. I won't spoil the ending, but I will say that it seems to justify the claim that the title is actually about Soo-hyeon, rather than Kyung-chul.

The film's story-telling style certainly seems to be heavily influenced by films such as "Old Boy", and "Sympathy for Lady Vengeance". The constant awareness of this fact seems to undermine the ostensible attempt at a witty, riveting film, and leaves in looking like an inferior clone. The movie isn't really anything special, but it is alright as a time waster.

"[Review] I Saw The Devil: revenge at any cost"
by HanCinema is licensed under a Creative Commons Attribution-Share Alike 3.0 Unported License.
Based on a work from this source