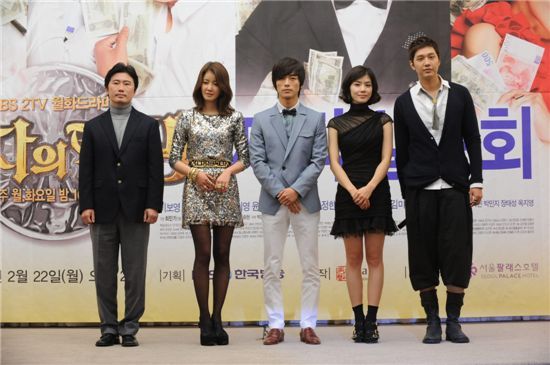 Basically put, "The Birth of the Rich" was not quite the pleasant drama. Suk-bong (played by Ji Hyun-woo), who justifies his spontaneous actions by saying they are meant to help him attain his goal of becoming rich, consistently talks about a rich man's dignity. But he seemed to betray his own values and goals by failing to be professional about his job and not being able to discern between capability and intrusiveness. And the reasons for why he wants to become so rich -- the fragmentary reasoning that he would be able to have everything he wants and that wealth runs in his blood -- does little to draw support from the viewers. Not noting how important aptitude and dreams are while regarding being rich is a job, combined with his appalling rudeness for his company senior Shin-mi (played by Lee Bo-young), has combined to create a rare breed of an unappealing main character.

The same applies for Shin-mi who will lean toward a cause. The sense of authority she has, seen in how she urges an employee to be sacked because she was offended by him, and how she forces her way of thinking upon others, was hard to empathize with. And the scene midway which depicts her as a competent entrepeneur left a bitter feeling in the mouth. She goes to a mid-sized company and does a bit of a threatening at the risk of the workers' wages while cutting her own hair. Yet there are still so many people out in the real world who fail to receive their wages even when they shave their heads bald. If the beginning is not a set-up intended at showing how the two main characters gradually mend their ways, it will be hard to expect much more from this drama.