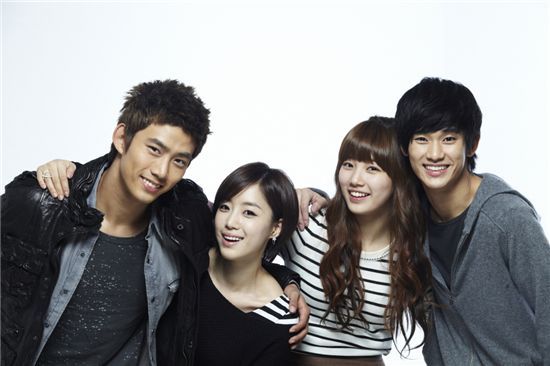 KBS drama "Dream High" takes off at seven years from now, with singer "K", a graduate of Kirin Art School, appearing at the Grammy Awards ceremony. Chung Ha-myung (Bae Yong-joon), the director of Kirin High, reminisces on how all he did was strike a "break shot" (the first shot in billiards that scatters the balls). The problem with the first episode of "Dream High" was in those balls. The way Ko Hye-mi (played by Suzy), the so-called genius in vocal music, jeers at popular culture went beyond arrogance to make it seem forced and the scene where Jin-guk (Ok Taecyeon) easily fights off the men who are after Hye-mi, several loan sharks including their boss (Ahn Kil-gang) who are after her father, or the overuse of slow motion was cliche enough to be seen in a scene of an online comic book. The drama even has Hye-mi, who dreamt of going to Julliard, change her mind to take audition in Kirin High which she so looked down on so much, all because of the 'benevolent' loan shark who offers to make Hye-mi as a star so that she would be able to pay off her father's debt later. Talk about pushing the story! Baek-hee's (Ham Eun-jung) character, who is an ardent follower of Hye-mi and auditions for Kirin High with her, insists to judges that they should fail both of them if they plan on failing only one of them, but this too seems to be too weak to convince viewers of why she later transforms.

Of course, this may all be intended at gathering the various characters to Kirin High. So in the meantime, we might as well just wait for the real 'break shot' to come. You might have cringed at a few of the scenes -- or it may have been because of the cold weather, who knows? But the scene where Suzy and Ham Eun-jung lip-synced their songs for their characters' auditions to get into Kirin High and the other various and lengthy auditions by other aspiring students, fell short of showing what actual auditions are like. What would viewers of cable music channel Mnet's singing competition "SuperstarK" think of this scene when they know what the actual auditioning scene is like? But at the same time, young idols Ok Taecyeon and Ham Eun-jung were quite stable in portraying their characters and even Suzy, aside from her auditioning scene, was not at a worrisome level. Before "Dream High" went on air, the biggest concern was about whether its cast composed of idol singers would be able to pull off their roles. But at the present state, what the drama should really worry about is its script and scene production. Will it improve once Song Sam-dong (Kim Soo-hyun), not an idol singer but a real actor, join the series in the second episode?

"[REVIEW] KBS TV series "Dream High" - 1st Episode"
by HanCinema is licensed under a Creative Commons Attribution-Share Alike 3.0 Unported License.
Based on a work from this source