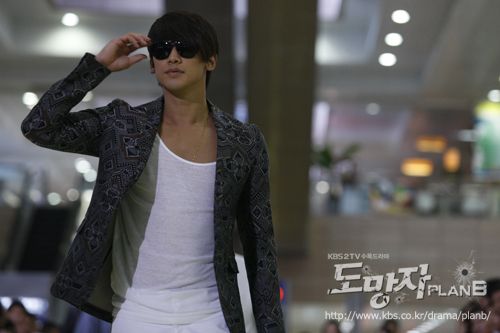 A scene from KBS TV series "The Fugitive Plan B" [KBS]

There is heated interest in the cameo appearance by comedienne Kwak Hyun-hwa, one of the proofs of the mixed response over "The Fugitive Plan B". It was impossible not to look forward to the drama when it features a cast composed of Rain, Lee Na-young, Lee Jung-jin, Yoon Jin-seo, Daniel Henney (and even Hong Kong star Ti Lung of movie "A Better Tomorrow, 1986"!), it is a new series by director Kwak Jeong-hwan and writers Cheon Seong-il, the mastermind duo behind smash hit drama "The Slave Hunters" from earlier this year, and the Red One camera they had used for the show would be put into use once again.

But could it be that certain preconceptions had formed regarding the show due to its cast and information on the crew? Because the drama revealed to the public on Wednesday night turned out to be a comedy similar to Japanese comic "City Hunters". And upon accepting this fact, the charms Rain has as a cute and sexy man, with his smiling eyes and hard-to-hate coquettishness, started to be noticed. After that, the rest came easy. The motorcycle scene resembling that of the scene from "Mission Impossible 2" was understandable, the sluggish action moves that the ninja from film "Ninja Assassin" put on, showing that Thailand must have been hot, was also understandable, and even the office plastered with augmented reality touch screens that strongly gave off the vibe of MBC drama "A Man Called God" were understood to be part of the comedy.

The reason that there is actually no need to think so perversely about the show is that the actors are merely introducing themselves in the first episode of this fancy drama before the actual curtains for the story is raised. It was fun watching the two main actors returning to the small screen for the first time in five and six years, and another form of fun came from the large number of actors from "The Slave Hunters" making cameo appearances. The story itself has yet to start.

"[REVIEW] KBS TV series "The Fugitive Plan B" - 1st Episode"
by HanCinema is licensed under a Creative Commons Attribution-Share Alike 3.0 Unported License.
Based on a work from this source