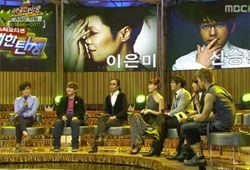 "MBC Star Audition" raised its curtains by showing the history of its past singing competition programs. And there was a pretty simple to them listing each and every one of the shows -- from the "Campus Song Festival" to the auditioning segments in their variety shows to the relatively recent "Show Survival". To prove that MBC was the network that gave birth to audition programs in Korea and that "MBC Star Audition" continues is continuing the tradition. Without question, it was aimed at season 2 of cable music channel Mnet's "SuperstarK" which ended its run two weeks ago.

The first episode of "MBC Star Audition", seemingly made for purposes of publicity ahead of the actual start of the competition, attempted at differentiating itself from "SuperstarK" by focusing on introducing the 'mentors' who would assist the contestants. It was their way of expressing their determination to fill up the aspects the show lacks in, despite the prize money being 300 million won which is 100 million more than "SuperstarK" and auditions being held on a larger scale. The future that "MBC Star Audition" is hoping to see for itself is its mentors Lee Eun-mi-I, Bang Si-hyuk, Kim Yuna, Kim Tae-won and Shin Seung-hun, all heavyweights in the music industry, to create true stars who will become talk of the town. Yet the premiere episode failed to provide any information nor anticipation to what sort of audition program "MBC Star Audition" aims to be and how it will hold its auditions based on what standards because it was too busy praising the mentors and expectations for the show. Set aside the composition of the mentors who did not seem too different from those of "Superstar K" in terms of neither musical orientation nor genre, it is hard to understand why it was necessary for the show to be broadcast live when all its hosts did was emcee in cliche ways without enough to talk about on set.

Of course, in a month, when the actual auditions starts, it will become clear whether this episode was an insignificant preview of a show which landed on MBC on the fever of "Superstar K" or if it was merely the weak start to a great ending. But regardless of whatever way the show closes, it will not change the fact that the start to "MBC Star Audition" was not enough to quiet the criticism it has been faced with even before its premiere.

"[REVIEW] MBC reality show "MBC Star Audition" - 1st Episode"
by HanCinema is licensed under a Creative Commons Attribution-Share Alike 3.0 Unported License.
Based on a work from this source