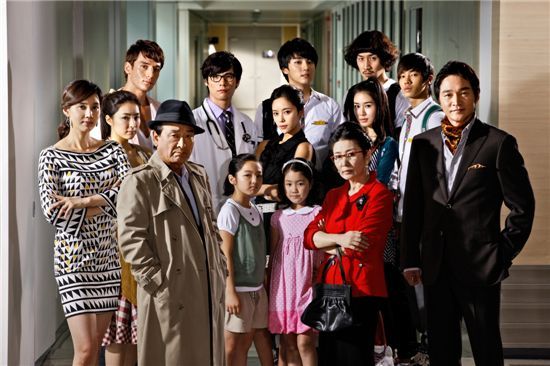 The cast of MBC sitcom "High Kick Through The Roof" [MBC]

"I wish time would stop", Se-gyeong (played by Shin Se-kyung) said as she turned to look toward Ji-hoon (Choi Daniel). And then everything really did come to a halt, showing the scene in black and white freeze and absolute silence. A silence where no more music could be heard from Ji-hoon's car and Kim Jo-han's "You are my girl", the ending song to the show the viewers had become so familiar with, no longer played.

We do not know how many seconds or minutes later the car accident that took their lives occurred. But what we saw was the screen filled with Se-gyeong's long-kept endearing love for Ji-hoon, which she openly expresses at that very moment, and Ji-hoon's eyes which shake upon hearing her remark because he is both sorry and feels an emotion he had not been aware of. It was for a very brief moment but almost a magical one where Se-gyeong's dreams seemed to have come true.

That is why this ending to "High Kick Through The Roof", which was an issue of controversy both before and even more so after its airing, cannot be considered a sad ending. It is not to say that the ending was not sad but it makes the viewer hesitate in believing that truly is how the sitcom ends. Yes, they die and the lives of those who go living on will never be the same. But the fact that they died and how probable it was to the story's plot is not what is important.

Death is the end of life but what ultimately makes up life is the collection of moments we experience along the way. As producer Kim Byung-wook had shown through his previous work -- that even ending to sitcoms can contain deaths -- "High Kick Through The Roof" showed that such an inevitable ending is overcome when one lives that moment as if it will last for eternity. That is why although Se-gyeong and Ji-hoon are dead and the sitcom is over, this really is not the end. We will only remember the show for the moments that it shined as such.

"[REVIEW] MBC sitcom "High Kick Through The Roof" - Final Episode"
by HanCinema is licensed under a Creative Commons Attribution-Share Alike 3.0 Unported License.
Based on a work from this source