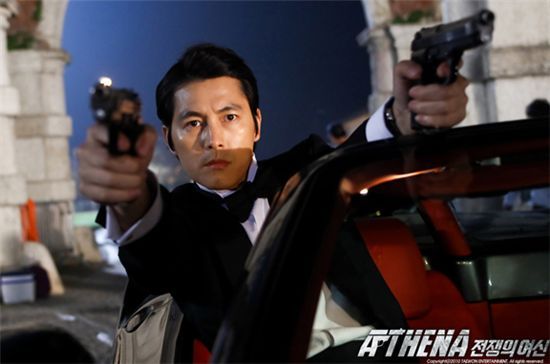 Efficient change of shape and the structure in order to adapt to the environment is called evolution. That is why new SBS action series "ATHENA", the spin-off to KBS series "IRIS", has evolved somewhat from its predecessor. Contrary to earlier expectations that the drama would start off by boasting its large scale, the opening was rather uneventful, laying forth the missions to be accomplished. Then came the action scenes skillfully arranged to gradually intensify and overall, heightening the tension. While the hands-on fight in the bathroom captured full attention of the viewers, the scenes that utilized the landmarks and building traffic added speed to the show by rapidly switching to new scenes. The vitality built up by such scenes soon channeled into a crazy car race, giving a full glimpse of overall scale and weight of the drama. Producing like such, in which the scale of the sequences becomes the flow of the drama itself, simplifies the narrative. Hence, the successor to "IRIS" whose story developed embarrassingly plainly in stark contrast to its grandiose backdrop, decided to focus on the strengths than mend on its weaknesses. Whenever a fight breaks out to find a "Dr. Kim" -- whoever he is -- the drama did not let viewers take their eyes off the screen. Such method of blatantly emphasizing the selling point of the drama is simple yet effective, working better than trying to force a certain message or style on its viewers. However, the problem was that these elements we enjoyed were limited to what happened three years ago, according to the timeline of the drama, even before the plot actually begins to unfold.

As soon as "ATHENA" dropped the action and started telling its real story, it ended up revealing its scanty structure. The scene of love-at-first-sight pulled off by plain characters in the late half of the drama only succeeded in ruining the speed accumulated at the beginning and not even the appearance of agents Hye-in (Soo Ae) and Son Hyuk (Cha Seung-won) -- supposed to be important turning points to the story -- were enough to create any tension. The production team will be in trouble if they still think dramas are a parallel line-up of actions scenes and non-action scenes because there is a big difference between the story being simple and being meaningless.

"[REVIEW] SBS series "Athena""
by HanCinema is licensed under a Creative Commons Attribution-Share Alike 3.0 Unported License.
Based on a work from this source