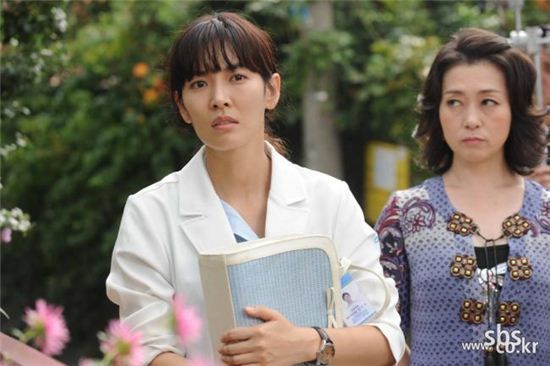 The first episode was light and refreshing. The main reason for this was that the drama was effective in its method of slowly establishing its characters by telling of their everyday life to reveal what they are like on the inside, instead of being obsessed about beating rival dramas through hasty development of various incidents and conflicts.

The rigid and cool-headed doctor Yeon-woo (played by Kim So-yeon) does not live an easy life because of her immature family and her complex that she is "a woman and did not graduate Korea University [name of top college in the drama]", while the aggressive go-getter Ji-heon (played by Jung Gyu-woon) is battered emotionally from continued misfortune from constantly being No. 2 and being pained by his family.

The beginning of "Doctor Champ", which focuses on how the two meet and what their stories are by having them witness each other's pain on their first encounter rather than using the cliche of romantic dramas where the two become involved in a misunderstanding and start to bicker, faithfully laid a ground solid for the theme of 'healing' of medical dramas.

The scenes, said to have been shot with DSLR camera Canon EOS 5D Mark II, delivers that story with warm colors which neutralize the cold ambience medical dramas usually give off and sets the tone closer to that of a human drama. And Uhm Tae-woong, who had responded playfully to people's pointing out that his character Do-wook has been imitated from U.S. drama "House" because of the single scene where he eats chewable vitamins instead of Vicodin, also made the series worthy of looking forward to by displaying how seasoned he is by nonchalantly responding to the prejudice through a short scene in the car.

What was impressive of the purpose of creating the series was the words it is 'a story not about the successful but the ones who do not give up'. Just like it declared, the first episode of "Doctor Champ" presents the viewer with the premonition that the characters, who each carry a deficiency, will heal and mature through their relationships during an era where stories of one's life turning around and success are the general trend.

"[REVIEW] SBS TV series "Doctor Champ" - 1st Episode"
by HanCinema is licensed under a Creative Commons Attribution-Share Alike 3.0 Unported License.
Based on a work from this source