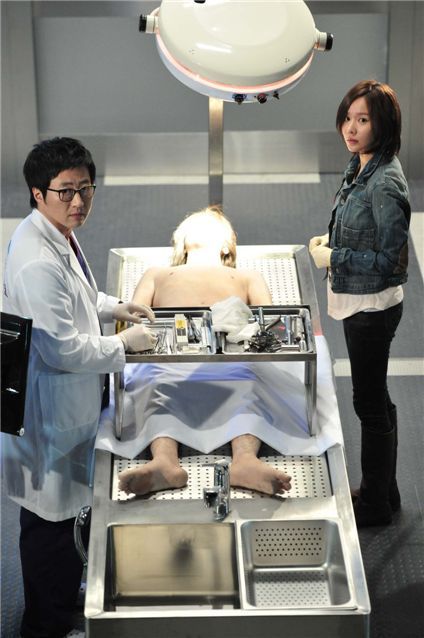 The first episode of "Sign" kicked off by showing the most intensive moment of the story. Yoon Ji-hoon (played by Park Shin-yang) takes away a body that was to be autopsied by another doctor, leaving Lee Myung-han (Jun Kwang-ryul) enraged and searching the National Forensic Service to look for him. Da-kyung (Kim Ah-joong), who had been arguing with Yoon, finds herself joining him in the autopsy room.

The opening of the drama that displayed some heavy emotions but not a word on what was actually going on save the subtitle "62 hours earlier", successfully triggered viewers' curiosity and made them focus on the screen. The scenes that efficiently showed the dynamic between the main characters, was truly one of the drama's best virtues. And where Yoon and Lee's relationship was shown, what could have turned out as something close to a boring explanatory scene was done naturally and intuitionally through the scenes of hearings in the National Assembly. The relationships between dead victim Suh Yoon-hyung (by Gunil and his acquaintances were also made easy to grasp through perjury in the court and video clips. While saving on time which could have been used for more explaining, "Sign" fully concentrated on moving its story forward. Although the part which had Ji-hoon slipped away the dead body did not make complete sense, the convincing acting of Park and Jeon were more than enough to cover up for it.

Meanwhile, unlike the male characters who boasted their distinctive characteristics from the very start of the show, female characters Da-kyung displayed a change of emotions too rapid to catch the viewer's eye and female prosecutor Woo-jin (Uhm Ji-won) who went around donned in a leather trench coat as if a female fighter from the "Matrix" series, leaving room for improvement. But since these characters are all set to change as the story unfolds, it would be too early to cut your expectations short. Overall, given the way the drama introduced all its main characters, its central plot and the main conflict without delving into unnecessary details, it can be safely said that the first episode of "Sign" was not so bad at all.