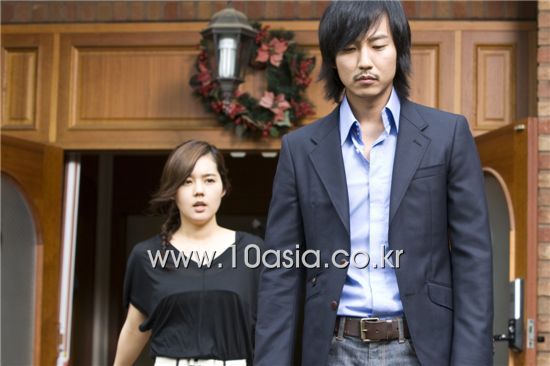 "Where am I heading toward -- heaven or hell?" The narration, spoken by character Gun-wook (played by Kim Nam-gil) as he fell into the water in the first episode, was repeated at the last moment of his life which eventually ended with a suicide. However, the person who ruled the world of "Bad Man" was actually Lady Shin (played by Kim Hye-ok), not Gun-wook. Lady Shin was the first and last person who set it up so that Gun-wook's life would solely be focused on revenge, and the mirror who reflects the twisted world inside "Bad Man" as it is. The moment she says, "It is me who won" as the trial ends and lets viewers know that Gun-wook is really the character 'Hong Tae-sung', Gun-wook's 'revenge fantasy' -- which had been made up of artificial things, or 'images' -- is shattered in that one moment. Perhaps he had already died at that moment, before he was shot by Monet (played by Jung So-min)'s gun and left to take his own life. Jae-in (played by Han Ga-in) came to Gun-wook too late to save him from the scar that had long ago been formed in Gun-wook and from the emotional hurt that wounded him deeper than the scar.

The premiere episode of "Bad Man", which ended with Gun-wook slowly falling into the water after looking as if he had descended from the sky, was a preview of the entire series. Claiming that he was going to find his 'real self', Gun-wook suddenly appeared on the scene one day, started his revenge by captivating everyone and was destructed by one single person who had known his true identity. The excessive amount of images and symbols, comparisons and metaphors which had been shown during the hours of his revenge have also hidden behind a glass mask, which is almost visible yet invisible. All that is left is the emptiness felt by people who ended up losing Gun-wook. Thus the tragic death of this man, about whom almost everything is unknown, is quite suitable to be the ending of "Bad Man" as all that was left of the show were images and no drama. Where did Gun-wook, who charmed everyone but ended up destroying himself, head toward -- heaven or hell?