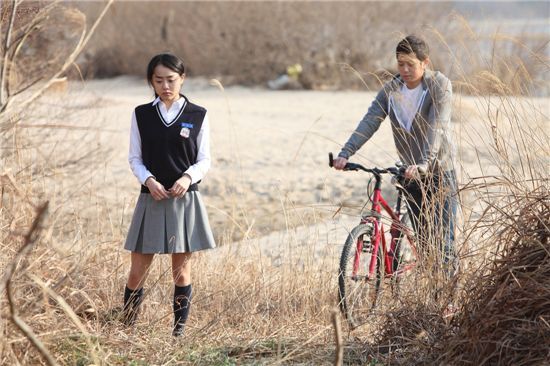 Eun-jo (played by Moon Geun-young) kept running and running. To get away from her mother's live-in boyfriend, who turns into a dog after drinking alcohol, and from her mother who gets a new man again and tries to take her with her. But she fails to escape every time. And Kang-sook (played by Lee Mi-sook) kept on pretending, believing that unlike all those "men like dirt", Dae-sung (played by Kim Kap-soo) who lives in a fairy tale-like house with a princess-like daughter, would be her last man in her life.

The first episode of KBS TV series "Cinderella's Sister" was a preview in itself, showing that the most intense and dramatic storyline would gush out of how Cinderella's stepmother and stepsister, who can survive through anything, will struggle to escape their unfortunate destiny. The scene where Eun-jo and Kang-sook fight in the taxi while they are running away, each going at the other fiercely, reveals their destiny exactly as it is. "You need a destination. You can't just get on a train, stupid girl, you need a place to get off!", says Kang-sook. "Anywhere! Anywhere but here is fine!", answers Eun-jo. While Kang-sook, in order to survive, was hooking up and breaking up with countless men whom she didn't even like, Eun-jo was often sexually abused by her mother's boyfriends and didn't even get to go to school.

But the show does not focus on that tragic element of the story, forcing viewers to relate to it, but rather depicts their destiny in a cheerful tone as if reading an old fairy tale book out loud. One cannot help bursting into laughter while watching Kang-sook nonchalantly seduce Dae-sung and Eun-jo's narration, which expresses how desperate of a situation she is in, sounds 'chic in an indifferent way'. The camera consistently keeps a certain distance from the characters, but on occasional moments when it goes up close and tightens its view on the character, the scene produces an unforgettable scenery. For example, the scene where Eun-jo's hair rolls down in Ki-hoon's (played by Cheon Jeong-myeong) hand and starts blowing in the wind. Such sensational image, old landscapes of traditional houses and descriptions of untypical characters are enough to make "Cinderella's Sister" an interesting drama. As well as the end to Kang-sook and Eun-jo's fate.

"[REVIEW] TV series "Cinderella's Sister" - Premiere episode "
by HanCinema is licensed under a Creative Commons Attribution-Share Alike 3.0 Unported License.
Based on a work from this source